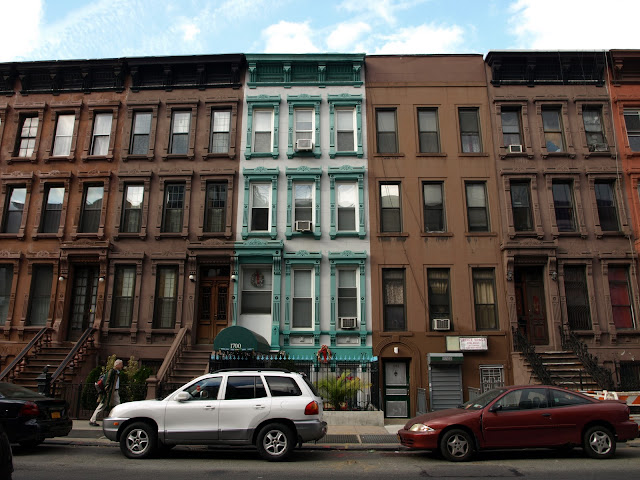 new york is not only the crazy times square, rockefeller center or fifth avenue. for a little more quiet, but perhaps less safe neighbourhood you can goto harlem (although depending where you go it can be crowded too)! which is what we did after washington square park. ofcourse most people know the apollo theater in harlem, where for example ella fitzgerald started her career at amateur night. however, we went to spanish harlem (96th - 120th st & fifth/third avenues), which is less well known, and less taken care of than harlem. the buildings are less fancy and the rents not as high as in downtown manhattan. in fact, it has the highest concentration of low income housing projects in the us. they do like to get their hair cut here. the opposite side of the street was lined with barber shops, i think we passed nearly 10 of them!
ah, i am now reading on wikipedia that al pacino was born on 108th street. perhaps in one of the above houses? (dont remember which street we were here, but somewhere around 110th-106th). i somehow liked this row of houses, but it was difficult to get a nice picture of them. we did not go there to check out houses, however. tomorrow a pic of what we went to see there...
here on flickr i posted another view of this row of houses, then it looks quite different, as you see!
Tweet
Pin It
Labels: new york, tourists
Posted by CaT at 11:08 PM

I like those brown houses with the stairs in NY, but I don't know if I like the blue and white one. Maybe old-fashioned, but it doesn't fit I think.