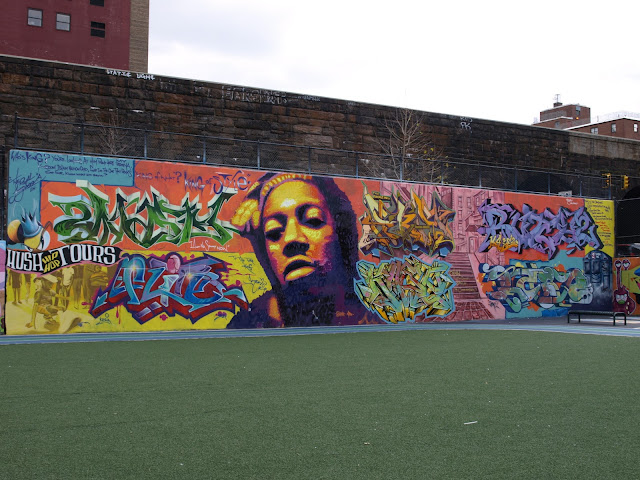 we went to spanish harlem to check out the graffiti hall (why not wall?) of fame... part of it you see above. it was one of the first places where graffiti writers could paint legally in new york, from the early 1980s onwards, organized by the school counselor. there were some pretty nice things, although im really not that interested in the tags, how fancy they may be. whats the use if i cannot make out one letter?! its only cool in the face you see above; its entirely composed of tags!! you can see that here, in a detail shot that i put on flickr. im wondering how often these walls change their content... here for example i found some pictures of the wall looking entirely different! im (still) reading a book about american graffiti, and saw pictures of the new york subway trains, entirely covered in graffiti. what a mess (inside and out)! only when they managed to eradicate that, painting on walls became more popular. nowadays, graffiti is a serious crime here, and you can be send to prison for 3 years...
Tweet
Pin It
Labels: graffiti, new york, tourists
Posted by CaT at 11:13 PM

Sometimes I like it, but mostly a building is destroyed by this kind of painting I think. When they use a special wall like this photo it is better for everyone.

Nice, I will definitely have a look at that wall myself sometime, thanks for posting!
(And could it be that the link to your Flickr page isn't working? :-(

woops! sorry! now the link should work...
its at E106th street and park avenue