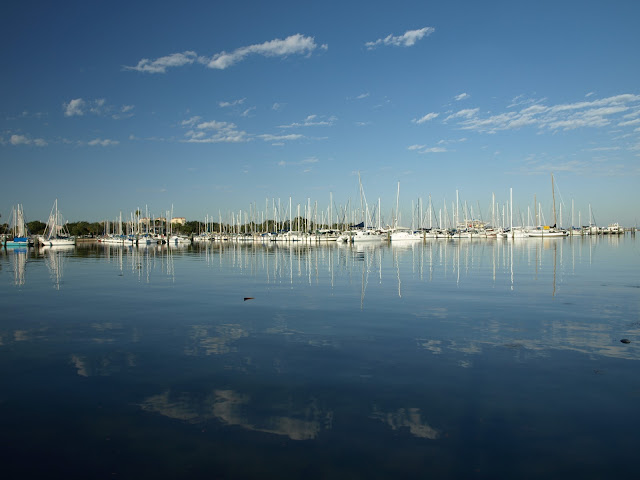 again did not know what photo to show for today. i was looking for one pic to show it all, but ofcourse that one doesnt exist! we woke up in this fancy hotel in tampa and went straight for the pool again. we were a bit slow this morning (also, we switched back to "our" time again, so we basically lost the hour we gained when arriving in memphis), but we didnt have to drive that far today. we first looked around in tampa a bit. it looked nice! and: it was sooo sunny! no jacket needed, the temperature was perfect. tampa seemed quite a modern city, we went through it quite randomly, without a proper tourist guide or whatever (we did see an ice skating rink! haha... in a city where it last snowed in 1977) then we drove to st. petersburg, a city located on a peninsula between tampa bay and the gulf of mexico. there we went to the dali museum, which was in a very special building (photos later..). i really liked to see so much of his work, and to see that his early work is so different from what (i guess) most people (including me) know. really beautfiful, weird paintings and funny titles. unfortunately it was extremely crowded in the museum... grrr... but we managed to see it all, and from up close (so much detail!). then it was already 4 and we still had to drive to our next stop. i suddenly realized we missed sunsets on the beach for the past 2 days, so today we really had to... the sun was amazingly red while setting and we tried to get to the beach... that turned out to be difficult! right at sunset we drove trough al place where all the beaches were private! we found a house for sale and after all the abandoned places we have seen we assumed it would be empty, but.. while running through their garden... we saw the owners sitting outside... oops. we drove a little further and found a bare piece of land surrounded by "no tresspassing" signs. well, it as our last opportunity to see the sun setting into the sea! so we went.. it was beautiful but the sun had gone down already...  buuuuhh.. :(
ah well... now we are in fort myers. in yet another fancy motel! it has a huge pool, with real lanes for real swimming.... jeejjj! so thats what we did immediately after arrival.
ah, and now i entirely forgot about the pic i posted; thats right behind the dali museum, in st. petersburg. you can see how sunny it is! i just read on wikipedia that this city is also named "god's waiting room", because so many people go here for their retirement (either american or otherwise). the other nickname is "sunshine city", since it is sunny here for 360 days a year... you choose which one you like best!
Tweet
Pin It
Labels: on the water, road trip
Posted by CaT at 12:15 AM

Ha,ha,ha I loved the part of you running through the garden. Can imagine how people must have looked at you. To retire here can be nice for a while but in the end a bit boring for me. Great you visited the Dali museum, didn't know there was one there.

The Dali paintings are amazing aren't they. Glad you liked it! Now try to be on time for a sunset, e.g. on the Keys ;)

Great story CaT, especially the running through the garden part, haha! And beautiful photo of the sunshine city.