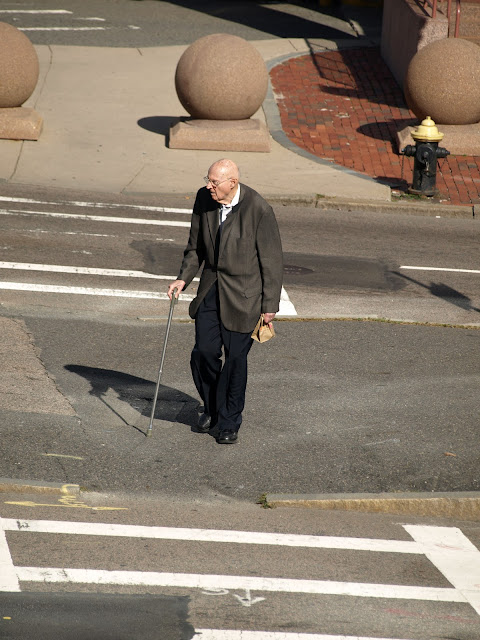 well, this man was just crossing the street, close to the TD garden. i have no 2-word title for that.. he did have a bag of dunkin donuts with him. some people like that stuff, apparently.. :)
behind him you see those large concrete balls. they surround many government buildings in boston, and were placed there after 9/11. why? so that people cannot drive their truck or whatever into the building.... at least, thats what someone told me. and i did see them in front of several government buildings, but googling around does not give me much, and im too lazy to really search.. ah well..
Tweet
Pin It
Labels: boston streets, photographing strangers, real americans
Posted by CaT at 11:48 PM

He looks quite old, nice photo.

funny: you need concrete balls to drive into a building in the first place hahaha

I think you're right about those big structures in front of government buildings but it may have begun earlier, perhaps after the Oklahoma City bombing.

HAHAHAHA. that would be really sad.... glad i have absolutely no need for dunkin donuts...