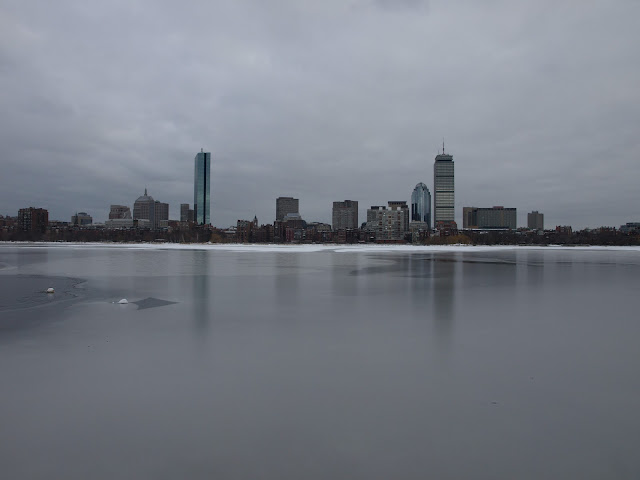 we had a nice walk on sunday, it was not too cold, although quite grey out, and the snow was still there (its raining, right now). we took the red line to central square in cambridge, and then walked by MIT, hit the charles river and walked on the cambridge side along the river, then crossed the longfellow bridge and were back in boston. i took a lot of photos while walking, one of them above.... on the right you see prudential, and to the left the hancock tower. i was very surprised to see the river is (partially) frozen. sure, we had a few very cold nights, but most days it has been rather mild. im sure the laws of physics can explain this all, but i cant... :) on july 4th we were in a canoe on this river, what a difference!
supposedly, the charles river is one of the cleanest urban rivers in the usa nowadays, but in the past it was extremely dirty; you were not allowed to swim in it, and if you happened to fall in, you would get a tetanus shot and antibiotics! this was common practice until mid-1990s! i do have to say, americans like to give you as many shots as possible (everyone gets the flu-shot, just 2 days ago they asked me if i didnt want a tetanus-shot, as i hadnt had one since childhood, and most (all?) teenagers get vaccinated against hepatitis B. when arriving here they didnt believe the note my physician wrote for me, namely that i received all required vaccinations, and thus they wanted to vaccinate me again against some childhood-disease. i refused and thus i was required to have my blood tested to prove i was indeed vaccinated. i still remember how furious i was then..).
anyways, you still are not allowed to swim in this river naked, as you can see here. you will get arrested and handcuffed... but perhaps those officers just secretly enjoyed that... (otherwise they would have given the man at least a towel, no?!)

You have ice, I haven't seen it here yet this winter. Your story about the vaccinations suits well to a colum of Silvia Witteman today in the Volkskrant about american doctors. Her son had a wound on his eyebrow and had to be operated with full equipement and medication in Washington. She got a bill of 1500 dollars! Now she lives here and her daughter had fallen on her chin with a simular wound and the family doctor just sticked it together with a kind of glue in 10 minutes. She thinks it probably will cost 28 euro's. Sometimes I am really surprised by the hysterical way of handling things overthere.

They prefer to call it 'preventative' instead of 'hysterical' here ;) But still for Dutch (and the rest of the world) it feels like overkill. Couldn't find Witteman's column online yet, but my guess is that if she had US health insurance that $1500 probably was her deductible/copay ('eigen risico'). If she had a Dutch/Euporean insurance the hospital must have thought 'Ah foreigners, let's wheedle them out some money' and used all the bells and whistles they could find. Charging $1500 for a bit of glue on an eyebrow might have been a bit too obvisious even for them ;)

I'm sure you knew the Charles was the inspiration for this classic.

this is Belgium said...

I just simply love the picture of the awesome Boston skyline..

regarding health care.... i can only say "our system" is better. its insanely expensive here, and so are the insurances. i think a visit to the doctor costs around 600 dollars, just to see him. so im not sure they waste money by doing as much unnecessary stuff as possible. the dutch do have another opinion of what is necessary and whats not, clearly.. :) (regarding vaccinations for example; they really do think here thats of utmost importance, to vaccinate everyone against the flu). i think medical care in part is so extremely expensive because doctor's insurances are terribly high, which again is a result of all the lawsuits that they have to protect themselves against. as a result, it is expensive for the patient to get medical care (and insurance). as a result of that, many people dont go to the doctor, even when they should, simply because they are not insured or because they cannot afford it, and will go when it might be too late.
all that is not based on facts, but just what i think, observing the system here.