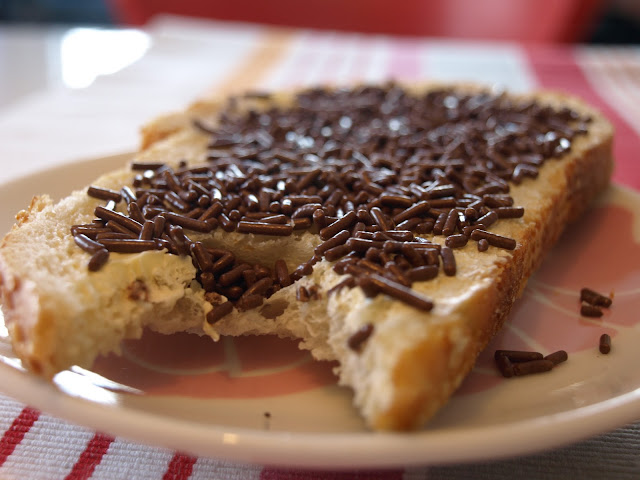 i have not been home in 2011... by now i have not been to the netherlands in over a year, and i really start to miss little things (the big things i missed before, already... haha). one of the things that more and more came to mind when having breakfast or lunch is pictured above. a delicious slice of bread with chocolate sprinkles! yes, this is what the dutch eat on a regular basis, and yes, this surprises everyone not from the netherlands. and no... those sprinkles are not entirely the same as the ones you use for baking, to just add that little extra to a pie or cupcake. i found that out the hard way... :) just 2 weeks ago i could only think about a "boterham met hagelslag" (a slice of bread (boterham) with (met) chocolate sprinkles (hagelslag)). when we were in the baking section of the supermarket, i decided to buy such a little box with the baking sprinkles. i almost bought 2, as they were only 1,50 a piece.... at home, i did not put the box in the cupboard, as not to forget it during breakfast the next morning. but surely, i didnt forget it, it was the first thing on my mind when waking up. we toasted some bread, i put on some butter, covered it well with the sprinkles... and was disappointed right after the first bite. ofcourse the taste was wrong! beeehhh, this was so not hagelslag..! :(
luckily... our dutch neighbor is much more knowledgeable about where to get dutch stuff in the usa than we are, and she happened to go to a dutch store somewhere around boston. she got us a real, dutch box of chocolate sprinkles!! yumyuymyum. thats what you see above... the most real bread we have been able to find at our supermarket, toasted and buttered, and then real dutch hagelslag. hmmmmm. a true delicacy. for a dutch living abroad that is..... :)
ah, and hagelslag literally means "hailstorm". now isnt that funny...?
if you want to try some hagelslag, either "melk" (milk chocolate), or "puur" (bittersweet), just order from this website!
Tweet
Pin It
Labels: food, the netherlands, things i miss
Posted by CaT at 11:12 PM

Oh, I can imagine you missed this so much after all the heavy sandwiches of the US. The photo is really great you can almost have a bite in it!

I agree with biebkriebels. It looks delicious. Perhaps you made a few americans curious.

What about Dutch Old Cheese?

Gun: even Dutch Old Cheese can be found over here! Most deli departments of the bigger supermarkets carry Old Amsterdam or similar, Smoked Gouda, Edam. I saw (small) wedges of these at Stop 'n Shop, Whole Foods, Trader Joe's, Costco. Or west coast: try Safeway. Or try delicatessen stores specialized in European food, e.g. Karl's Sausage & Kitchen in Saugus MA. They have Gouda and slice it for you.

Cat: on Amazon you can also order Dutch food like chocalate sprinkles ($20 for three boxes), but I like to support our local small businesses ;)

if you don't mind paying 10 dollars for a measly little piece of old amsterdam........ we had some more pindakaas met hagelslag this morning :)

ah yes... dutch old cheese... but not for the prices here. will be even lekkerder when going home and then having it... :)

I remember eating these as a child. Yummy!

My heart sank when I saw those sprinkles, thinking they were those waxy things you can buy here. Ugh!! I'm very glad the Dutch version is closer to real food and that you found some. Now that I know what it is this looks delicious. Next you need to find what's called "artisan" bread (that's what we call the stuff that tastes like real bread) and it'll taste more like home. I wonder: is this sort of a Dutch version of chocolate coissant?

@kay: thats exactly how it tasted, like wax!! i knew before i even bought them that they wouldnt be good, but i just wanted them to be good. wishful thinking.. :) no, we have chocolate crossaints too. this is really just something people put on their bread on a daily basis. its also good with the cheap white bread, not toasted (although i do think that the dutch version of that is still healthier than the us-version). in fact, we have quite a variety of sweet sprinkles, sugary, chocolate in different forms, crushed aniseed... etc.. quite yummie! i do think the biggest consumers are kids, and you eat it less frequently while getting older.. :)

This is Belgium said...