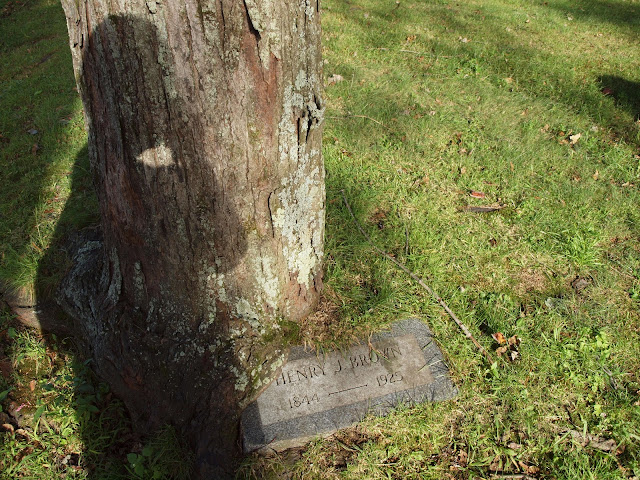 this is at the wyoming cemetery in melrose, close to our apartment (a 5 minute walk). i go here every now and then, sometimes alone, as it is so pretty! next to the cemetery is pine banks park, and then there is yet another cemetery (the forest dale cemetery), but somehow i prefer this one. many people, including us, run or walk around these 2 cemeteries. with my (slow) pace it takes 30 minutes, just enough.. :) (somehow i feel weird running on the cemetery itself, and i think its not allowed. but many people do walk their dogs, and, ofcourse, you can access it by car. im now kind of used to this, but the first time i saw this in the usa i was totally surprised and a bit annoyed. "really, driving on a cemetery?!"). i liked this grave as it is so extremely tiny, and, i presume, got partially covered by the tree trunk over the years. i tried to find something, anything really, about this person, but google could not give me any answers this time. grrrrr.
so... something about the cemetery then. it was established in 1857. in 1887 and 1891 they expanded the grounds, leading to a total of 61 acres. other than that, it has not changed but for the trees that have grown older and bigger. and ofcourse the addition of people, currently there are 25,476 graves. right now, the cemetery is running out of space (although it looks like a really spacious cemetery), but they are working to solve this problem. the above grave is in the 1700s section, so named because it was also the place where the first house of melrose was built, in 1645. the exact location is indicated by this sign, its near the entrance of the cemetery. it was the house of deacon thomas lynde, who built it himself. around that time, 3 families owned melrose, the lynde family being one of them.
other than that, i found on strangeusa.com that the cemetery is haunted... according to the description: "the cemetery is known to have had strange occurances in the late night hours. especially, a feeling of negativity and people have said they have felt like they are being watched. many people have been chased by a young girl and have heard strange sounds coming from the rear of the cemetery. dark figures have also been reported in the 1700's section" (i.e. the section where i took this pic. the shadow, btw, is my own... ;) ). but other than that description, and some commenters describing similar experiences, i could not find anything about this! i myself have not experienced anything weird at this cemetery, perhaps i should go there again and pay more attention to the supernatural...... does anyone believe in such things... ?
for more graves on taphophile tuesday, go here!
Tweet
Pin It
Labels: cemetery
Posted by CaT at 5:10 PM

Are you sure it is your shadow? I don't know haha. Maybe somebody saw you running there doing your work out and mixed you up with a spooky girl.... But anyway, it is a nice grave so simple next to the tree.

I hope the roots of this tree are keeping Henry J Brown safe from the other ghostly creatures.

At the largest local cemetery (Mt. View Cemetery, about 220 acres) it's common for people to walk their dogs, go for a run, or just spend some quiet time reading. It's a beautiful space, with lots of trees, and from the upper areas, views out over Oakland and the bay. Every time I've been there, I've seen people just out walking enjoying the open space, even when the weather isn't so good.

hahahahahha, biebkriebels, i had to laugh sooo hard about your comment! but yes, mystery solved then, that must be it!! :D

@hamilton; yes, i think it must be a nice place like that..

@gene; at this cemetery i saw some people play ball. but the one next to it has a long set of rules hanging around everywhere and you are not supposed to sit around, etc..

perhaps we should camp out..

It even looks like people park their car on Wyoming Cemetery to go hiking in Pine Banks...

I wonder if the tree was planted around the same time Henry Brown was. He lived a long life for people at that time. Too bad you couldn't find out more about him.

Nah! I am not one for the supernatural. My brother is, though. I think perhaps all people of religion believe in the supernatural, although they use other terms for their belief.

I do like this gentleman's place of rest. It is very simple and the tree root oozing over the stone is symbolic, for me, of 'ashes to ashes, dust to dust'.

Most of the cemeteries here in Sydney allow cars on marked roadways through them. I guess this allows older and disabled persons to still access grave sites of departed beloveds. I often see bike riders and dog walkers wandering about, too. I have yet to see a picnicker, but would not find it in the least offensive.

Thank you for your continued contribution to Taphophile Tragics, CaT. You come up with some wonderful posts, and I love the way that you craft your text. Much appreciated.

Hi, CaT. Thanks for visiting my blog today. I was going to tell you about Julie's new meme, but it appears you have already found it.

As to City Hall, Boston's "new" city hall from the 1960s is very controversial. Many people dislike it. I actually worked in it for the first three years it was open. The interior is pretty bland (ugly). But, if you want to take some good photographs, google Old City Hall Boston and visit the old one on School Street, just two blocks away from the current City Hall. It is a beautiful building and has a statue of Benjamin Franklin, etc.

Ha,ha,ha the suggestion of Tim is also great!