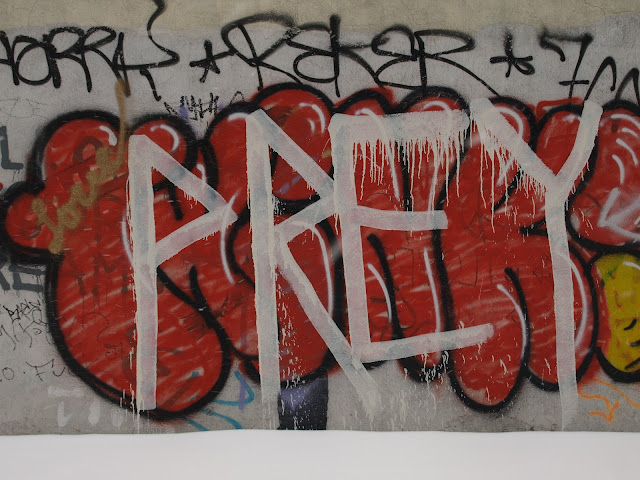 i like the monday mural theme, but, as i said before, its not that easy to find graffiti in boston. im sure the graffiti busters have something to do with that, combined with zero-tolerance policies (recently they arrested someone who tagged subway cars and stations in boston, plus other cities, and he could goto prison for 3 years!). but there is a little here and there.. (and actually a lot along the orange line, but this is not legally accessible). just read somewhere that boston spends around 6 million/year to get rid of graffiti!! above is in chinatown. and as you can see, its very ugly! i wouldnt call it a mural either, but.... underneath this used to be (most likely) a real banksy. the only thing remaining is a tiny part of the man, in black, underneath the white R. this is what it used to look like, in 2010. then someone decided to paint over the man, as you can see here. and at some point at least 2 more people went over that, as you can see above. we actually had been looking at this wall before, seeing nothing but ugliness. haha, its still ugly, but just wanted to show that many graffiti-writers do not care on which wall they write, or whether they overwrite someone else's "work". i think its too bad that something this ugly replaced the banksy, although all of them did something that was illegal; defacing a wall that is not theirs... but still, something like this is much more interesting than a grey empty wall, right? (but this person had permission to paint that wall).
last week someone told me about "hanksy", a kind of a prank on banksy, but with the face of.... tom hanks. hahahaha. here you can see an example. no clue who is placing those..
for more monday murals, click here...
Tweet
Pin It
Labels: boston streets, graffiti
Posted by CaT at 10:57 PM

It's hard to know what to say. The lost Banksy makes me want to cry. In my mind there is a real distinction between tagging and graffiti art. I can see why taggers would be drawn to a whitewashed wall but trust they wouldn't have tagged over someone else's art work. Generally that code of conduct is followed here.

The Hanksy just makes me laugh. It shares the feel of the Alien Invader stuff: fun, humorous, and harmless. Thanks for participating in this week's Monday Mural. Keep your eyes peeled. There's bound to be some outlaw artists in Boston you can document and post here.

Sounds like there's a real war going on in Boston with graffiti artist. Some cities like Halifax, Nova Scotia have started a program of controlled graffiti. They allow the artists to paint in select areas under the control of the city. In my city of Pickering, Ontario there is a skateboarding park where the artist have a free hand.

It has become a bit of a mess when everybody is painting over the other one. I thought there were silent appointments between them not to do so. But apparently not always.
About the tulips on the Dam, I read in the paper 260.000! were placed there.

In California there were a lot of taggers who I think were connected to gangs. There seemed to be competition for one group to put their tags over anothers'. The tagging wasn't so much about art as it was marking spots. . .a lot like a bunch of dogs, in my opinion. I wish it were more about art than territory.

yes, there is a lot of violence in graffiti, especially years ago (according to my book about graffiti), and indeed gangs used to mark their territory with graffiti. all crazy people.

i do think its really toooo bad that people painted over the banksy, but looking at the banksy untouched, it seems this wall was entirely empty, so maybe other people felt it now was ok to write on this wall (their ugly tags).... so in that respect...

What a shame that that Banksy got painted over. Thanks for telling, this is all very interesting!