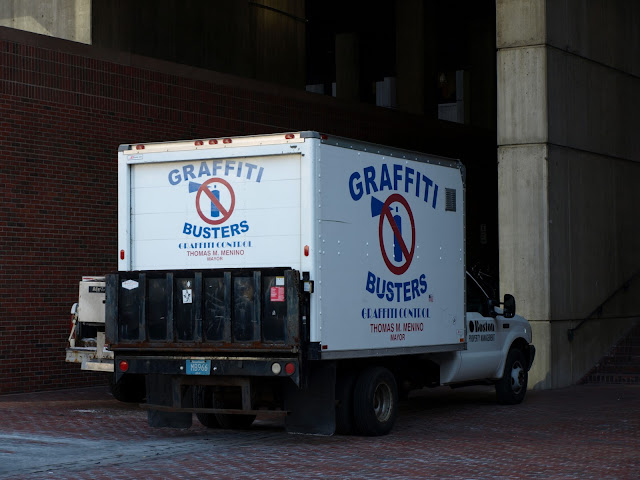 saw this truck at government center in boston, a few weeks back. just looked it up; you can call the "mayor's hotline" (!!) if you see some graffiti, and they will come and remove it. since they started, they have removed graffiti from more than 1000 locations (but i cant find when they started). indeed, there is not that much graffiti in boston, especially when compared to other cities we recently visited.
the mayor of boston is thomas m.menino, and he likes to put his name on everything, as you see, his name is on this truck. his name is also on 600 (!!) bikes that were recently placed throughout the city, for the bike sharing program allowing you to rent a bike at one place in the city and return it somewhere else if you like (my question; did he personally label them all?) his name is even on all the trash cans around boston! on one side they say "big belly" (i guess because of the way they are shaped.. i should find the pic i once took of that), and on the other side... "mayor thomas m. menino" (and he does have a big belly!). these are just a few of the public things that carry his name... i saw many more.... why?! i think its weird... yes, hes the mayor. but... not the dictator! (putting your name on everything public somehow is more suiting for a dictator, i would think..) besides... for how long is he the mayor? if the next mayor comes on, will his/her name have to be exchanged for the current one? what a waste of time is that?!
Tweet
Pin It
Labels: boston streets, government center, graffiti, weird sign
Posted by CaT at 9:19 PM

Not so self-satified is he? How can you invent such an idea. Menino would have done, but why Thomas M.? Sounds a bit like "Peter R. de Vries". Those people have a kind of a identity problem I think.

maybe it's all of his initiatives

In Vancouver graffiti removal is done by private companies and it's not cheap. It's also the law that businesses must remove graffiti from their property immediately.

Boston's mayor seems to rather full of himself.

I think it is very American to put your name on everything as a mayor/commissioner or whatever your title is. They seem to love it, maybe its some sort of ego thing as well. We 'Hollanders' are not used to this stuff, haha. Like the photo by the way, makes me think of Ghostbusters ;-)

Oh, the egos of politicians! I think it's a way to get taxpayers to "contribute" to the reelection campaigns. They plaster their names everywhere so you see (and, they hope, remember) all of the "useful" things they've done. Taxpayers pay to put the names on, then pay to have the next name, too. You'd think that simply doing a good job would be enough, wouldn't you?

well.... if i wil be mayor... my name will be too difficult to be written down everywhere.. i will just order to make everything purple! ;)