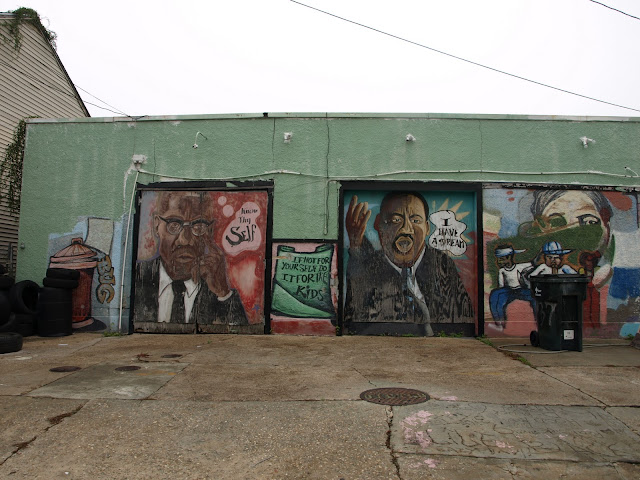 ... a dream. who doesnt know that it was martin luther king who said that?
during our holiday, we saw the lorraine motel in memphis, where martin luther king was assassinated while standing on his balcony in 1968. in fact, the wife of the motel owner had a stroke some hours after the murder of MLK, and died 5 days later. years later, when the motel was in financial troubles enough money was raised to buy it. and only in 1991, it officially opened as the national civil rights museum. we were there on christmas eve, and the museum was closed, unfortunately.
the next day we drove to new orleans, where we saw this mural of martin luther king next to malcolm x. this area was not the most inviting, and i felt extremely touristy when i stuck my camera out of the window to take a picture...
the third monday in january is a national holiday in the us, to honor martin luther king, observed for the first time in 1986. yet it was only in 2000 that all 50 states in the us recognize this holiday, with new hampshire and utah being the last states to do so.

here you can view other murals from around the world!
Tweet
Pin It
Labels: graffiti, road trip, tradition, while driving
Posted by CaT at 10:49 PM

Indeed, your post was the 12th of the day. Welcome to Monday Mural, CaT. I'm so glad someone else had an MLK mural to post today. I visited the museum at the Lorraine Hotel a few years ago and found it to be a very moving experience. It's an excellent museum of the Civil Rights movement. They've preserved the room Dr. King was in the day of his assassination. Hopefully you'll get back to Memphis again, so you can really see what it has to offer.

Looking forward to your future posts.

I didn't know there is a national holiday remembrance day about Martin Luther King. A great idea. The mural is touching in its simplicity.

the faith of graffiti


Publicity ;o) Every Friday (and the Weekend), The Challenge "Walk In The Street Photography"