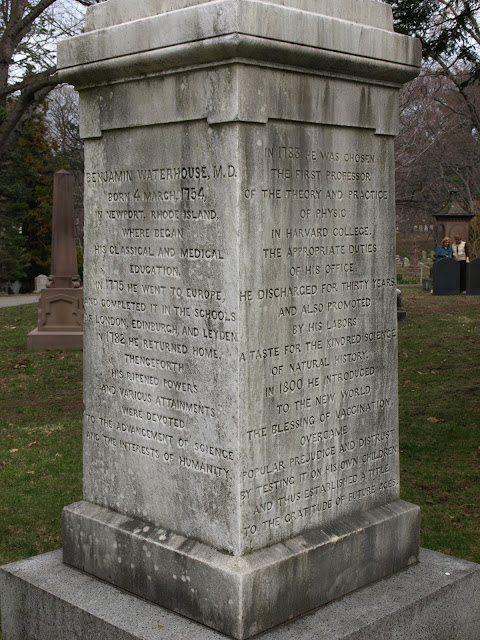 i took this pic long ago, at the mount auburn cemetery in cambridge (for an earlier post about this cemetery, click here). this is the grave of Dr. Benjamin Waterhouse, who died at age 92 in 1846. i took this picture because i liked this stone, and it is not usual to see that much text on a grave. upon reading it, i became even more curious! i put the pic in my "to post sometime, but first need to read more about this person" folder, and never did so. but thanks to taphophile tragics, im finally posting it! when waterhouse, born in the usa, was 21, he went to europe to study medicine, both in britain and the netherlands; he got his degree in leiden (as you can read on the stone; leyden). back in the us, he became professor at harvard medical school. in europe he had learned about the small pox vaccine, which he wanted to introduce in the us. he wrote to the then-president, john adams, as they had been roommates in the netherlands (how interesting!). when a reply did not come, he wrote to the vice-president, thomas jefferson, and when he became president in 1801, waterhouse introduced the vaccine. he did the first vaccinations on 4 of his 6 children, i guess the ultimate proof that a doctor deems something safe... he then also did a "controlled experiment" in which he deliberately exposed 19 vaccinated and 2 unvaccinated boys to the smallpox virus; the latter 2 died. (well into the 20th century this kind of experiments happened. i suggest this book if you want to know more about that). and so, he brought this vaccine to the usa. vaccines were discovered by edward jenner in 1796, when he noticed that milkmaids who caught the cowpox virus did not catch smallpox. by 1977, this deadly pathogenic disease has been eradicated, thanks to vaccination! it is said that jenner's discovery leading to vaccines has saved more lives than any other person...
of course, i got most of this knowledge from wikipedia... i could read it for hours, just following links... :) but.. tonight, the english wikipedia will be unavailable for 24 hours, to protest against proposed legislation in the United States — the Stop Online Piracy Act (SOPA) in the U.S. House of Representatives, and the PROTECT IP Act (PIPA) in the U.S. Senate. if you want to know more about that; click here.
now i really digressed too much... to see other taphophile tragics, click here!
Tweet
Pin It
Labels: cemetery, harvard
Posted by CaT at 2:45 PM

I have never seen an obit written on a headstone. And it is still so easy to read! This is interesting to see as I have heard of him (and Jenner) and read the book you linked. Very thought provoking read.

If I can trust what I saw on the video series "John Adams," Abigail Adams had herself and her children vaccinated with smallpox while John was off in France. But the "physician" simply scraped open a pox on a smallpox sufferer and applied it to an open wound. Not for the faint of heart. Current medicine doesn't have all the answers, but I much prefer 21st century approaches to what I've learned of 18th century practices.

I saw the video (great video) and read "John Adams" (by David McCullough; good book, but long), and the book references Waterhouse a number of times. Besides sharing a house with the Adamses in Leyden, he sailed with Adams' son Charles back to the U.S., and thought very highly of Adam's son John Quincy.

John Adams himself was inoculated in 1764 using the aforementioned scraping method, during a smallpox epidemic in Boston. Abigail had herself and the children inoculated in 1776. The process was introduced to America by Adams' great uncle, Dr. Zabdiel Boylston.

The vaccination method of Waterhouse sounds like a big improvement :-)

Well, I don't know about the others, but I want that marker on a 'lazy sussan' please. Twizzle it around for me please!

I have folders like that, remember this for later. Then I often forget until happenchance ...

Nowadays he would be up on murder charges for infecting the two who died. Even worse, he would not get his research grant from the NHMRC because his Statement of Ethics would not pass muster!

I love all the history included in this post today, CaT (I have searched but cannot find your name!!)_. I do not know ALL the gentlemen mentioned but do know some. I am just a sucker for history, and for detail. I love meaty posts such as this.

Thank you for your support of Taphophile Tragics. I love yer work.

I come to your site for my daily photo intake and what do I get? a history lesson, haha. Very interesting read CaT, including all the additional info in the comments. I can see why this stone caught your eye, very well preserved!

Wow, that's a lot of information to be engraved on a headstone. It would be interesting to know what the cost of the endeavor in today's dollars would be. Elaborate headstones seem to be a thing of the past. No one wants to spend that amount of money on the dead, it seems.

What an interesting story, good you kept the photo to sort out later. Those times were sometimes difficult to survive, only the strongest. But thanks to those clever and brave doctors the world is a lot healthier.

That is such a fascinating story Cat. Enjoyed your words as well seeing this interesting headstone. Many thanks.

thank you all!
i realize i have more and more "why's" everyday, and i want to know the answer to all of them, haha!
i think this grave was so pretty, and so simple, in a way. i wonder who wrote the text. his second wife arranged for it, but did she also write it?

and kay and gene, i forgot that that was indeed how they used to do it. ieekk! but imagine surgery before anesthetics.. interesting to hear a little more about their stay in leyden, i could not find much more myself, through a quick search... the dutch and the americans do have a long history... :)

I remember hearing a scientist say that the most responsible being for saving lives wasn't a human, but the humble white lab mouse. Very interesting romp through the past. I'm glad you expanded on the story behind the rock. So much more interesting then "just" a photo

Amazing. I've never seen a marker tell the story of the individual's life and accomplishments.

when i am dead, my headstone will read a similar story, except with a few different details. It will be more about how i liked to eat at mcdonalds and how i never really did much at work, especially for the first 2 hours..