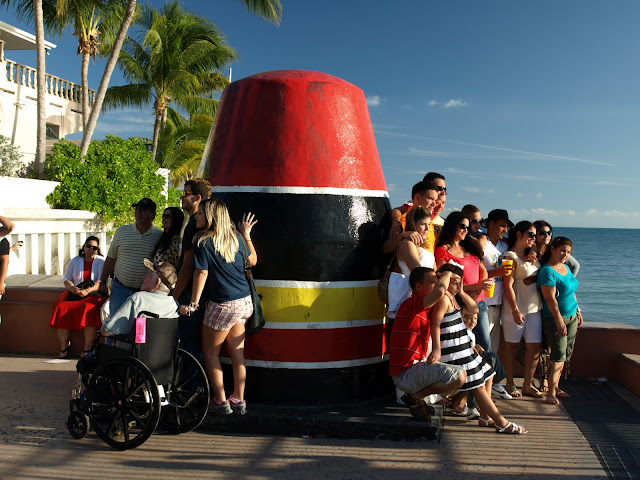 i did not know what to post today... and then decided it had to be a pic with people in it, havent posted that for a while! but my most recent pictures with people in it go back to the first of january, when we were at key west, florida. this is a sort of monument, intended to resemble a bouy, standing at the southernmost tip of key west. this is written on the side with the least number of people, and it also mentions that from here its only 90 miles to cuba (as you can see here). there were many things on key west labeled as "southernmost", the southermost hotel, house (but there was also a southernmost southernmost house next to it), supermarket, restaurant... etc... but this monument was overcrowded with tourists. there was quite a long line with people wanting to have their picture taken next to it. at some point people became impatient and just had their picture taken from the other side, as you can see here. the ones facing the sun probably ended up with a better picture, but the others have the text with "southernmost point...", having at least an excuse as to why they were standing next to that ugly big thing! :) of course, this is not really really the most southern point of the usa. on the island itself are points farther south, and also those are only the southernmost points of continental usa, the island hawaii is more southern.... in fact, i just read there is another key, key ballast, that is more southern than key west, but this island is privately owned, and therefore apparently does not count (perhaps because tourists cannot get their picture taken there?). this island had been owned by someone for the past 50 years, but last year it was for sale! for only 13,800,000 dollars.... you can see that here, on the "private island website". "private island website"... can you believe it?!
it was hard to write a post without visiting wikipedia... :( but they are blacked out for 24 hours to protest against SOPA and PIPA...
Tweet
Pin It
Labels: people photographing, photographing strangers, road trip, tourists
Posted by CaT at 5:22 PM

There's a place in the southwest U.S. that's supposed to be "Four Corners," where four states touch: Arizona, New Mexico, Utah, and Colorado, I think. There's a plaza where the spot is marked and you can stand with a hand or foot in each state - and have your picture taken. I think new measurements have been taken to indicate it's off by some great distance. So I have a silly photo of myself splayed in 4 directions for nothing.

It is a bit ugly sign indeed, they could have done better. But I like those end of the world points and dreaming that far away is another country. It is nice to see how the people are posing.

ive been on that 4 state mark, there is a big round metal plate with the four corners in it :)