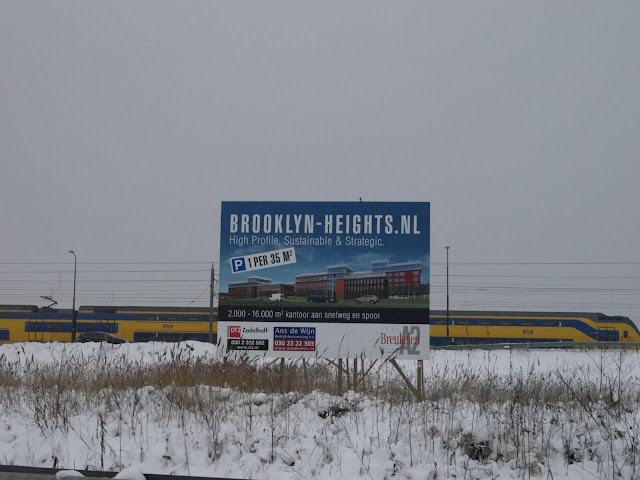 as you might know, new york city's borough brooklyn is named after a very cute dutch village, breukelen (breuckelen in old dutch). the dutch breukelen is close to the city utrecht, where i used to live, and sometimes i would bike around this area, which is very beautiful...  (buuuuuh, i miss my bike!). there are many huge and beautiful mansions along the river, dating form the 17th century belonging to wealthy merchants, mostly from amsterdam.  already in 1624, the dutch were somewhere in that area on long island, NY! in 1646, breuckelen was part of new netherland, but in 1664 they lost it to the british. over time, the name evolved from breuckelen, brockland, brocklin, brookline, brookland and eventually, to brooklyn. brooklyn's official motto is still a dutch one: Eendraght Maeckt Maght, which was also the dutch motto until 1816. it means "unity makes strength".
now, brooklyn heights is a neighborhood within brooklyn, which looks rather nice, judging from google images. but.... the above advertisement is taken in the netherlands  (in december 2010)! around breukelen.... (with in the background a dutch train...). why the hell do they call it brooklyn heights?! why does everything have to be in english? (this happens more often in dutch advertisements). it just really annoyed me...
anyways... here we still dont have snow. it started snowing on monday, and there was a nice (little) layer of snow on everything, enough to get the snow removers out of bed early, by 5 am (!!!) they had cleared the paths around our apartment complex. but.... by the end of tuesday it was all washed away by the, yet again, high temperatures and rain. now its freezing again, and some snow is expected. perhaps even more on saturday!! lets see....
Tweet
Pin It
Labels: new york, the netherlands, things i miss, while driving
Posted by CaT at 10:48 PM

I hadn't known any of that about Brooklyn. It certainly makes it sound like a more interesting sort of place.

We've had snow for the last 3 days and there was snow in a nearby town on Monday, but no snowplows. The County decided to try to save $$ by not plowing on weekends or holidays. People got pretty upset. I'm posting snow pics for the next several days.

Oh yes we are so international, but as long as our prime-minister speaks so terrible "coal-english" it is ridicule. Don't know if the "Brooklyn Heights" are even realized because all the building projects are cancelled here because of the crises.

Also Flushing is derived from the Dutch city of Vlissingen.
And there some snow again (Friday Morning), let's see if we get more this weekend ;)

yesyes there is snowwwww!!! hope tomorrow brings more...
and indeed, it was funny to hear mark rutte speak with obama.
im curious to find out if the brooklyn heights were indeed cancelled. the name alone was probably just too much. :)
and yes, i now saw eyeliquor's poster. agreed.