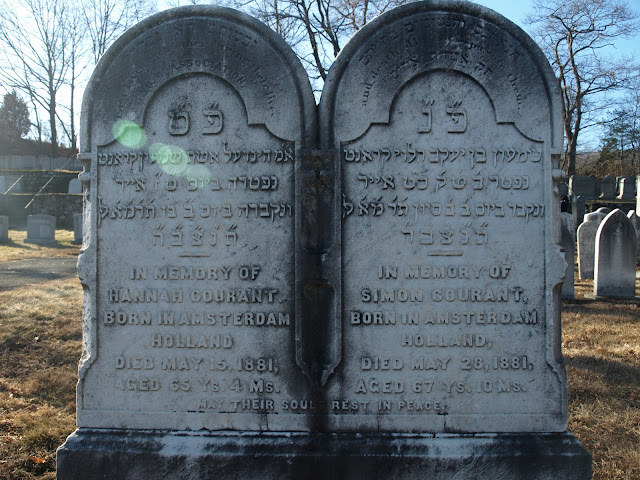 i am enjoying the taphophile tragics more than you can imagine! i was so eager to do today's post.... and then i didnt have much time... :( on top of that, i was (as often) not satisfied with my pictures and didnt know which one to choose. well, this is what you get... the graves of hannah and simon courant. as you can see, hannah died on may 15, 1881, and her husband less than 2 weeks later. i think it is interesting that their age is precisely noted, but not their date of birth. as you can see, both were born in amsterdam, the netherlands. and guess where those graves are located...! just a few blocks away from our apartment.... we live here now 1.5 years, and i had no clue that very close to the 2 cemeteries i described last week, there is another cemetery. and it gets even more interesting (to me, at least); this cemetery is meant only for people born in the netherlands, from dutch descent, or married to a dutch! i came to know about it when i was frantically searching for info about henry brown for last week's post. then i had to wait till the weekend to finally check it out.... grrr..
this saturday we went. it was so sunny it almost felt like early spring.... we walked to the street facing the main entrance of the wyoming cemetery, an average residential street where we once parked the car... just a little further, in between 2 houses was the little "netherlands cemetery association and roxbury mutual society burial ground"!! one part was still entirely empty, but the middle was quite packed with very old graves, many dating from before 1900. some were illegible, but i could see that many people indeed were born in holland, mostly amsterdam, and some names were indeed typically dutch! i went by every grave (tim got bored, but it was so interesting!).
i have spent quite some time trying to find information about this cemetery. why in melrose?! (of all places..). but the only thing i could find was this page (that led me to this place initially). in 1859, a group of dutch jews (explaining the hebrew on many graves) living in the greater boston area formed a fraternal organization, the netherlands cemetery association, and they opened this cemetery for their members. currently, there are around 475 graves, and it is not affiliated with any temple or synagogue. it is still active, as i saw one grave from 2010 (or was it 2011? i forgot..)
i could not find a whole lot about hannah and simon courant (i have to admit i did not spend a lot of time on that, i was more interested in the history of the cemetery and am frustrated i could not find more). the only thing i could find is that they had a son, mark courant, who was born around 1855 in the netherlands. in 1882, just after his parents died, mark married betsy bronkhorst (she was born in england in 1859, but her family seemed to be from from belgium originally), in suffolk, massachusetts. she was an assistant house keeper, while he was a cigar maker. betsy died already in 1885, and was buried at the netherlands cemetery too, while mark died in 1917 and was buried in woburn, massachusetts. (i found this all here)
there was also supposed to be one grave with a dutch inscription, so of course i wanted to find that one. that wasnt easy, but eventually i did find it (by then tim was really, really bored..). perhaps i will show you that some other time!
for other taphophiles, go here...
Tweet
Pin It
Labels: cemetery, oak grove village, the netherlands
Posted by CaT at 11:07 PM

there were not Dutch ghosts in the cemetery (in contrast to the other one), because the Dutch people are too levelheaded for ghosts. they would say: Ghosts? doe effe normaal.

Interesting CaT, a cemetery especially for the Dutch, and in Melrose of all places. Like you, I am also enjoying the taphophile tragics a lot! Can't wait to go to a cemetery over here in nyc and post a taphophile tragics myself someday. THanks for all the interesting information in this post, also made me laugh out loud again over your (and Tim's) frustrations, sorry about that :-)

Unexpected and fascinating. You did some good research!

That is a great story, a special cemetery for the dutch, can you believe it? You did a lot of research and Tim too I read, he supported you with lots of sighs? Had to laugh about his ghosts!

Funny discovery! On Forest Dale Cemetery (Malden side of Pine Banks) there's a Van der Neucker buried and there was another Dutch/Belgium name on that gravestone.

Was wondering about why Hannah and Simon died almost two weeks apart. Tuberculosis? Consumption was a well-known disease among cigar makers and I read that in the 19th century this disease killed more people in New England (particularly Boston area) than any other disease.

Hi, great blog you are doing here, and every day, at that ! I like the "feel" of your photos, and looks like we have some common interests... love your snow covered old car, and the graveyard shots, church signs, etc... Thanks for stopping by today from Taphophile...

Great research! Thanks for filling in some of the blanks. So interesting! In California there are small Mexican communities that have formed when one immigrant comes, finds work, then sends home and friends and family join him. There may be a small community of Mexicans, all from one city in Mexico. I wonder if that's what happened in Melrose. And perhaps there was a now gone temple or synagogue that also drew people there.

I have never seen that Van Der Neucker - i guess the cemetery is safe.. :D

Delightful to read, CaT. Poor Tim. I must admit that generally, I prefer to go to cemeteries and graveyards by myself, so as not to bore my friends!

I wonder if you may have a wider shot of this Dutch graveyard, to show it between two ordinary buildings. It may be that a church also stood on this site, although I should think they should not have been allowed to knock it down. I know that the Dutch were very important in the early years of NYC but do not know about their importance to Bostoon.

I am so glad that our meme has led you to discover new cemeteries in your own neighbourhood.

Maybe the Courants were so closely bonded that the husband could not live without the wife. Just a thought ...

Next week I will respond to your query about the expression 'meme' and its derivation.

I love your style of writing. Keep it up.