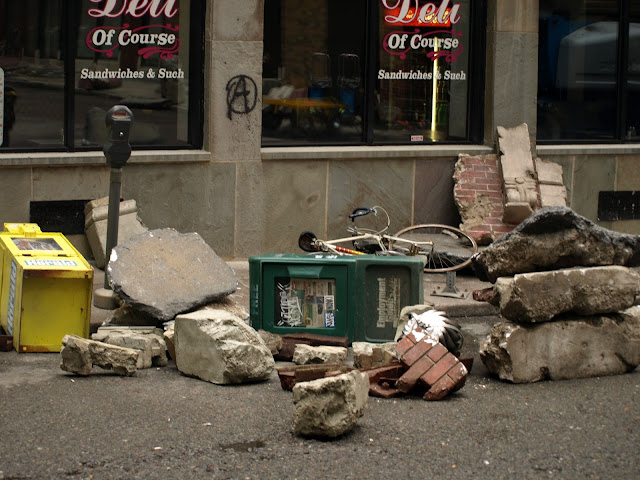 we were having a long walk in boston, and suddenly we entered this street. entirely deserted, but with such a mess! (i must admit, this was a few months back, but i havent been taking pictures this week..)  what on earth happened?!! and why was nobody there...? then we saw all those bricks are actually made of styrofoam! from afar you really couldnt tell! without knowing, we had entered a movie set... but the shooting had been done already, and they were cleaning up... :( we also saw several trashed cars, some on top of each other...
it was for the movie RIPD (rest in peace department). its due to release somewhere in 2013, and stars ryan reynolds, kevin bacon, jeff bridges... among others, and has something to do with undead police officers and whatnot... apparently, they have been filming all over boston! (so, only for that im curious to see that movie). it was interesting to see that for such a movie they just shut down several entire streets in the financial district of boston on a sunday afternoon (not that it is very crowded there during weekends anyways), and how many cars (entirely demolished) were involved, and how many props, and that even the newspaper boxes were brought in by them, as well as the bike, the streetlight and the parking meter.... imagine how much work it is to clean it all up again, and how many people are involved!
Tweet
Pin It
Labels: boston sightseeing, boston streets, movie
Posted by CaT at 12:11 AM

First impression would have been a shocker for me. Nice capture.

Funny that it is all fake, looks rather real. It is all in the movies.

Life is so FAKE at times.

I wouldn't give it a second look but since Jeff Bridges is in it I might check it out.

Wow - Interesting shot! Glad you found out what the story was. This would have been a big mystery if you hadn't. Undead police? Sounds like it could be pretty bizarre. . .cops pursuing bad guys from beyond the grave?

ryan reynolds - its all good..