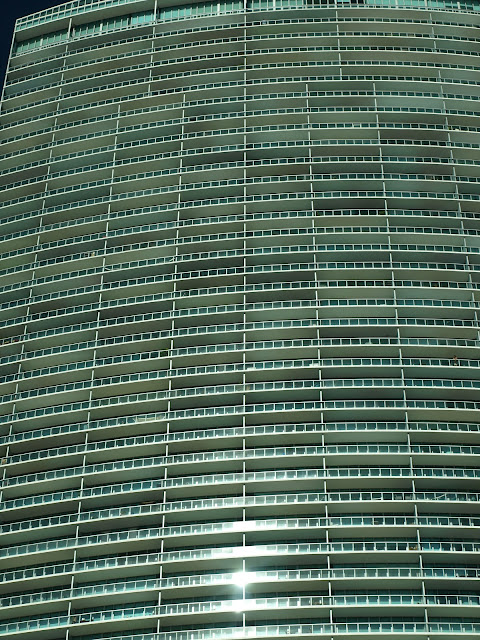 do you see him....? i think its funny that waldo has a different name in other countries (in danish its holger!). the first book was published in 1987 titled "where's wally", by the british illustrator martin handford. somehow i only know it as "zoek willy" (dutch for "find willy"), but according to wikipedia the dutch call him wally, like the original. i really liked this book, but i never owned one myself... every time i see it im still tempted to buy it!
sorry, im just not done yet with my pics from our holiday... so heres another one from miami. there were many rather new looking apartment buildings like this. the entire city appeared new, rich and fancy. and predominantly spanish....  unfortunately we did not have much time here, and the time we spent we were somehow rushed (for example by our expiring parking... grrrr). i sure liked the beaches and to see ocean drive, but i was attracted by the city. i liked new orleans better, and the more northern part of florida.
Tweet
Pin It
Labels: photographing strangers, road trip, while driving
Posted by CaT at 10:44 PM

In San Francisco you can find Waldo across from the Museum of Modern Art. It was the first time I'd ever seen that done and I thought it was cool. The book is cool too.

Wow, it makes me dizzy. I like the books too and many kids do. In the library I often had kids asking where can I find Wally's book and it was almost every time lent out.

Is there really a Waldo in your photo, can't seem to find him. But very nice photo (with or without Waldo :-))

He or she is very small. . .and not wearing red. Bad Wally! I'm still enjoying your travel shots. Bring 'em on. Thanks, also, for the link to Harold Feinstein yesterday. I'd not seen his work before. Can you imagine taking shots like that when you were 15 or 17 years old?

@tim; its a he!
@wayne; thats cool indeed, nice pic! we once saw a real waldo in boston, but i was too late to take a picture, i was not sure whether he was dressed like that intentionally...
@bieb; a friend had it, and both me and my sister loved it!!
@nellies; yes, hes there; but without a shirt... indeed, not very much dressed like waldo...
@kay; yes, i think his photos are amazing and indeed, i cannot imagine that... his latest exhibition was on war-photos he made, from soldiers; very impressive and really gave you an idea how it must have been for them, cant wait for the book!