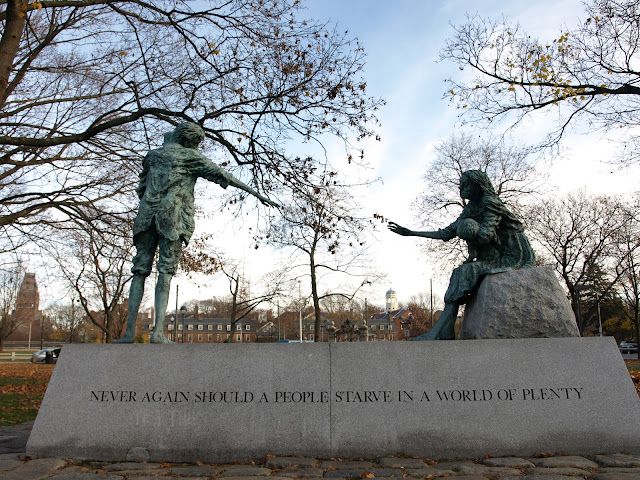 this sculpture is in cambridge, in a park called the cambridge common, which is right behind the harvard university campus. i liked this sculpture, but did not really know why it was there. underneath the inscription you can still faintly see that someone wrote "yet they still do" (i think someone should repaint that, its a good addition that makes you think if you didnt when reading the first sentence).
it is a memorial to the great hunger in ireland. both the woman and the man have a child in their arms, and they depict separation due to hunger. the great potato famine was a period between 1845 and 1852. due to a potato disease, potatoes were not available, while a large part of the irish population depended entirely on the potato for food. 1 million people died, and another million emigrated from ireland, causing a significant drop in the population.
regarding food..., today i read an article in nature magazine in which the authors argue that sugar should be taxed, just like cigarettes and alcohol! they write that there are 30% more people obese than there are undernourished (although im not sure this is worldwide or US only). interestingly, while sugar is present in nearly every product, long-long-long ago sugar was only available during a short period of the year; in fruits during harvest, and in honey (but honey is guarded by bees... ). so.. evolutionary we are (still?) not used to taking in so much sugar, yet we all do.... (many people eat 500 extra calories a day, just from sugar additives in their food!! just look at the labels... especially here in the us many, many products will contain high-fructose corn syrup)
several governments are now thinking of taxing sugar, but while you dont need to smoke or drink to survive, everyone does need food..... im not sure making sugary things more expesive will help to reduce sugar intake. but maybe it will help the food industry? if sugar becomes something "bad"/expensive, maybe they will stop putting high-fructose corn syrup in everything?
sorry for the boring post, here is the entire article, which is in fact really interesting. if you cant get to the entire article, i can always send it to you... :)
Tweet
Pin It
Labels: art, boston sightseeing, science, weird sign
Posted by CaT at 11:07 PM

Thanks for this- what you called- boring post. I find it very interesting. Didn't know that sugar wasn't always available long ago. Also didn't know there is sugar in almost every product. I will try to read the whole article :-). And like the photo a lot with the trees against the sky.

grrr....i was afraid of that already... maybe i can figure out whether i can link the pdf to this post, but i will send it to you now!

Not boring but interesting! This week I read something about wheat and bread: when poorly digested it can cause opium-like effects that can make you slightly addicted??? Know anything about it?

Well Manon, we have soft drinks, ketchup, canned soup, canned fruit, and breakfast cereal, and there happens to be no high fructose corn syrup in any of it. We do have miracle whip, that DOES contain corn syrup (not to mention it tastes like crap), but that's not on your list. Does these facts make the products any better? No.

Rather than looking at lists of products that may or may not have these things, when you are picking something up at the grocery store, you can just look at the label. However the only way to avoid eating processed junk is to avoid the western lifestyle. And none of us do.... :)

This statue is great! And the only boring part, is when you said it was boring. Maybe our market-basket bread contains opium, because it's really good and now we are eating it every day! :D

are you sure our canned fruit doesnt contain the corn-syrup?!
we do have jarred tomatoes with extra sodium... which i only discovered because the other jar says; no extra sodium!! why the hell do they put extra sodium in it?
we never look at labels... and perhaps its better, we will get headaches and stress from looking at them, hahahahaha!

ah, i never heard about opium-like effects. hmmm. i am going to look it up. later... :)

I wish I'd known how harmful high fructose corn syrup is a long time ago.

Part of the problem, I believe, is that the gov't heavily subsidizes corn farmers. This seems to be an incentive to use arable land to grow corn for fuel, animal feed, etc. It seems obvious that the land would be better used to grow healthier crops.

Tim, let me rephrase that by saying "I found this shortlist with food products that might be rich on high-fructose corn syrup (HFCS)" ;) I just copy-pasted it from http://www.diabeteshealth.com/read/2008/08/20/4274/the-dangers-of-high-fructose-corn-syrup/

NOT boring!! What's more primal? We all have to eat.

I've never known the story but my great grandfather left Ireland in the 1850s. And traveling in Ireland even today you can have a meal that includes potatoes served two and three ways.

Native Americans are a prime example of how humans have not adapted to the "contemporary" diet of high fructose, empty calories. In many areas where they live on reservations with low income their rates of diabetes are truly epidemic.

I think it's probably been in the years since World War II that processed foods have devolved into garbage-based substances that are made for convenience, made cheaply, and filled with things that appeal to the common denominators: our sweet or salty preferences. As food has become big business quality and nutrition has taken a backseat to profit, one reason there are things like the Slow Food movement or "locavores," eating fresh, locally-produced food.

Well you have brought about a lot of reactions on your article. I like the sculpture a lot. It was a terrible time for the Irish people and so many people died. What about the food, I think commerce is making people more and more unhealthy. Why ad so much bad things to daily food. Here the issue is now to much salt in bread and other foods. Why do they do that? How to avoid that on a daily base? You can't read all the labels all the time unless you are on a lifethreatening diet. I think I don't use much sugar, but never control it, because I now know that it can be in everything. Thanks for the information.

im glad you all did find it interesting! i just had the feeling i was writing a scientific paper.. :) but the real paper is indeed very informative...
yes, the high-fructose corn syrup, at first i also did not know.. but its hard to avoid here!!
i guess, as they always have said already, too much of anything is not good... but well... thats not always easy

I spent loads of time in Harvard Square in eons past, but this is probably a newer addition. I often can't decide if I like your photos or your writing better. That is a compliment. Many bloggers can do neither.