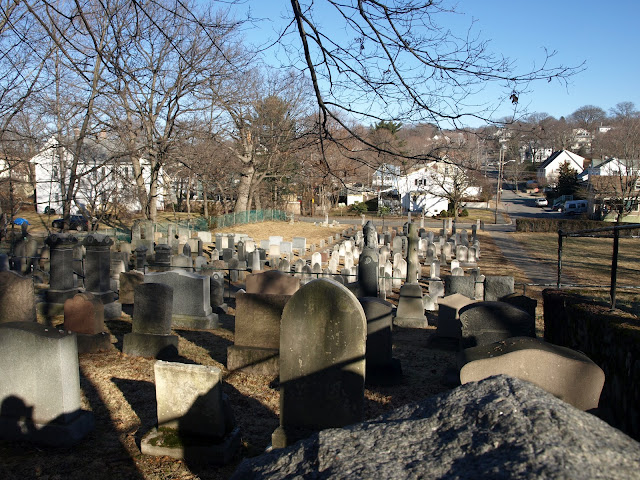 julie from taphophile tragics asked me last week about a wider shot of the netherlands cemetery (last week i just showed 2 graves). i took some while we were there, but the sun was so beautifully bright, only the ones from behind turned out ok. as you can see, this small cemetery is literally just in between 2 houses. instead of the next house, there is suddenly a cemetery, you dont even see it when down the street. it just pops up. unfortunately i have no idea what was there first, the residential street, or the cemetery? (the cemetery dates from 1859). i also still dont know why this cemetery is in melrose. i presume it was just a matter of availability, as i havent been able to find info about a dutch settlement or whatever in melrose. there are people buried here from as far as (relatively) worcester, which is an hour by car from here. melrose was a relatively new town, only in 1845 it separated from the city of malden, and became the town of melrose (in exchange for city in 1900). in 1845, the melrose-area got 3 trainstops, and people working in boston in search of a country atmosphere moved here (haha, actually just like tim and me... although it was more that we would never be able to afford the same kind of apartment with all its amenities in the center of boston...), perhaps some of them were dutch.. ?
there is one other pic i wanted to show, but i cannot break my self-imposed rule of 1 picture a day. so, i cheat, and you can have a look here, at my flickr account, for the one grave that was in dutch (and a few more pics of this cemetery). its not a spectacular photo, but the dutch text is just weird, and was hard to decipher, at first. but it reads "hier ligt het stoffelijk overschot van roosje ween", which translates into "here lies the corpse (!!) of roosje ween". i think thats very weird. why not just, here rests, or here lies... why "the corpse"? perhaps their dutch was not that good anymore, and they didnt know "stoffelijk overschot" is not something you use on a grave? (or is this normal? any dutch who knows this?)
for other taphophiles, go here!
Tweet
Pin It
Labels: cemetery, oak grove village
Posted by CaT at 11:05 PM

I have had a look through your Flickr images, and it becomes apparent that this is an orderly cemetery. It is very much so in one of those other shots. Are Dutch people like that: orderly? I know the Swiss have that reputation, but do not know about the Dutch.

By stating the obvious, that a corpse lies here, maybe they are simply expressing themselves as per their own era. It does seem to our ears to be a quain and rather obvious thing to carve into a headstone.

Around my suburb, there are individual houses that have been torn down and nothing has been built on that site again. Not a house, anyways. I can think of three blocks where there used to be a terrace house, but where there is now a child's playground. Each of the blocks is a wierd shape, which may account for it.

Your Dutch cemetery in Melrose appears to be much larger and very regular. I am so glad you discovered it ...

I think other times other customs. It sounds a bit formal, but the old graves I saw in the old church in Amsterdam didn't have that text. I don't know why they mentioned the corps, but poor Roosje is lying there for sure.

I wouldn't mind having them as neighbors at all. Lovely setting.

What an intersting mystery! Cemeteries used to be located within the City of San Francisco. As real estate became more precious and the city grew in the early 1900s they actually dug up one or two cemeteries and moved them further south, out of the city limits. Colma is about a half hour drive out of S.F. and now has acres and acres of graveyards. Perhaps Melrose had similar appeal: less expensive land in the country? Though it seems a little far. Did Melrose have any sort of agriculture that might have been familiar and appealing to Dutch settlers?

Several of the cemeteries here in Oakland were started when they were "outside town", but the town grew to meet them. The cemetery I posted pics from last week, Home of Peace, now has houses all around.

This looks as if the town has grown around the cemetery. It also looks very orderly - such a Dutch trait!

haha, yes i guess dutch are pretty orderly, although not as much as the german, or the swiss.. ;)
the early settlers here were mostly farmers indeed.... but melrose was, and still is, just a little town...

The variety of locations is as interesting as anything else.

About the neatly arranged stones: did you notice all the markers are facing east? I'm not sure but aren't most Jewish cemeteries facing east? I googled a bit, couldn't find a good answer to my assumption but I did stumble upon an explanation about older New England cemeteries with east/west orientation:

"What is the origin of the practice of all headstones facing east?

In many, but by no means all, early New England burying grounds the graves are positioned east/west. This east/west orientation is the most common orientation in other parts of the country and world as well. The earliest settlers had their feet pointing toward the east and the head of the coffin toward the west, ready to rise up and face the "new day" (the sun) when "the trumpet shall sound and the dead shall be raised" or when Christ would appear and they would be reborn."
http://www.gravestonestudies.org/faq.htm

the Dutch may be orderly, but i am not!