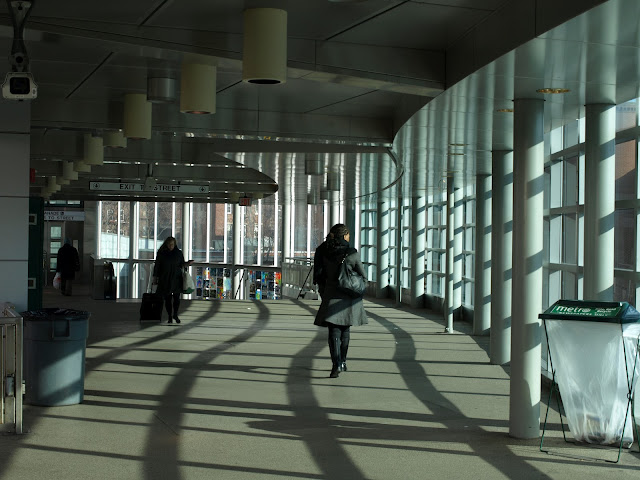 charles/mgh, thats the name of the subway stop where i took this picture. thinking of it, it might well be the only stop that looks kind of modern in entire boston. at least of the ones that i have seen. actually, its only the glass cage that leads you to the platform thats modern...
charles is for the charles river that you will cross when taking the outbound train to cambridge. mgh is for massachusetts general hospital that you will see on your left when taking the inbound train into boston. ofcourse, there is a wikipedia page for this red line stop. however much i love wikipedia, i never felt the urge to contribute to it myself, and often wonder how/when and whom decides its time to make an entry about certain things. but... it did tell me that the bridge that you are on when crossing the charles with the red line is named the longfellow bridge. i kind of knew that, reading it. what i didnt know, is that this bridge is also called the salt-and-pepper-(shaker)-bridge (shaker is apparently optional). this is because of the shape of the central towers on the bridge. hmm... we crossed this bridge several times by foot, yet i never thought, hey, those look like salt and pepper shakers! so... one day i have to go back and picture them, so that you can tell me what you think... :)
Tweet
Pin It
Labels: bridge, MBTA, red line, shadow
Posted by CaT at 11:34 PM

Nice shot! I like the wavy shadows. And you've got me curious about the bridge now... (You know about my 'thing' for bridges, right..?)

Beautiful shot with that light and curve in the facade. Like it.

love this photo with the shadows and the curves!

Ah, beautiful photo with the shadows!

Nice composition of light and shadows, straight and curved lines.

:) thanks!
@mriekje; yes i know. one day i will take a pic of the bridge....
hmm, maybe i already have one. but it will require a lot of digging through my pics.. might even be less time to just go there again. grrr

beautiful shot with the waves and the c.. oh wait, everybody is saying that! :)

Great patterns in this photo.