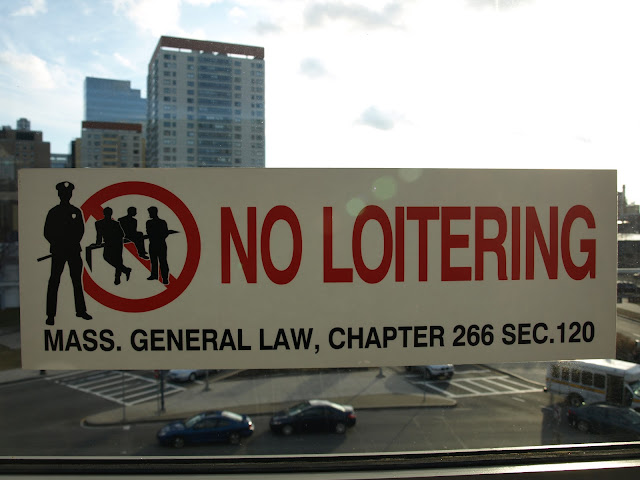 no loitering.... loitering is a funny word. it looks funny, but i never heard someone say it. when i say it, it sounds funny, but perhaps im pronouncing it all wrong... :) im still waiting for an opportunity to tell someone to stop loitering... haha.
you see this "command" hanging every here and there. for example, at the start of the path to our apartment complex is a bridge leading to a street of (i think) single family homes. every night around ten, this bridge is locked for reasons that are beyond my understanding, and early in the morning its opened again. next to this bridge is the "no loitering" sign. but how can you not loiter there, if you cannot pass the bridge if you fail to come home before 10?! (locals actually know a way past the 2 gates on either side, so i really dont see the point of locking it. perhaps to make the no loitering sign useful?).
so... no loitering means that you are not allowed to remain in a certain public space for a certain amount of time (dutch translation here). wikipedia is not very helpful, other than mentioning its mostly prohibited in the US, UK and australia. in theory you could get arrested for loitering. i dont really like the image, the policeman with baton and the 3 guys, casually hanging around. the one standing is smoking. even with this simple image, they managed to throw in some stereotypes!
the sign above was at the subway station (green line, science park), above a bench. but isnt waiting for a train some kind of loitering too... ? how am i supposed to wait for a train then.. ?
Tweet
Pin It
Labels: green line, MBTA, weird sign
Posted by CaT at 11:13 PM

So every language has his own expressions for "hangjongeren" or "hangouderen". Loitering can be done only somewhere inside I suppose?

That's just creepy! I guess it's to discourage people who are "up to no good" from hanging around or harassing people, or whatever. But I'd bet if you're whoever the sign is aimed at that you don't care about signs like this anyhow?

im loitering around your house all the time btw