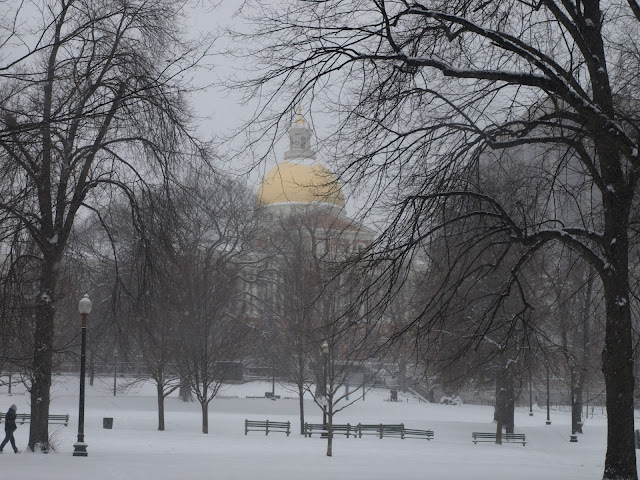 i took quite some pictures during the snowstorm in january, but since we havent had any snow since, those pics look a bit out of place.. :( but i like this one so much! today we were here again, its in the boston common, and you can see the state house in the back. today skies were perfectly blue, and the sun was shining. it was really nice walking around, and my wintercoat was too warm...
the state house was builst between 1795 and 1797 (i was surprised by that, somehow i thought it was built more recently). you can visit the state house, but we still didnt get to that...
i like its golden dome, you can see it from many places. when on the banks of the charles river, on the cambridge side, you can see it shine. originally, however, the dome was made of wood shingles! in 1802, it was covered by copper, to prevent leakage. first it was painted grey, and later yellow. in 1874 it got its real golden layer... then i found that it was painted black during world war II. the article doesnt mention why, which was my first question, ofcourse! amazing, how you can just type your question into google, and when its somewhere on the internet, it will pop up.... so.... the answer is..... it was painted black to prevent reflection during blackouts. this to protect boston from potential bomb attacks. i found that here, where you can also read why there is a little pine cone at the very top of this dome (i had never seen that, i guess you have to be closer to the dome to be able to see that).
Tweet
Pin It
Labels: boston common, boston sightseeing, photographing strangers, snow
Posted by CaT at 11:51 PM

Beautiful photo! Only for photos like this I wouldn't mind the snow to come back. Other than that I like the weather we are having right now very much ;-)

I like the atmosphere of the photo. With snow everything looks suddenly so different covered with white. I am surprised they painted the dome during WWII, were they really so afraid of bombings?

we still haven't gone in there!

I love this shot! There are so many interesting things in it -- the walker, the soft color of the gold dome, the texture of the trees and the snow accumulated on the branches, the misty quality of the snow, the vertical lines of the benches.

Some years ago I knew an older man who'd been a merchant seaman during World War II. I didn't know this but the U.S. and Britain lost many merchant ships off the East Coast during that time as German warships (submarines, I think) prowled Atlantic waters, picking them off as far south as Florida. Seamen like this man were at a premium because they'd lost so many. Blackouts were common on the west coast at night for fear of Japanese attacks. I'm not surprised that the state house dome was painted black for similar fears.

Lovely! But it looks so cold! Brrrrrrrrr