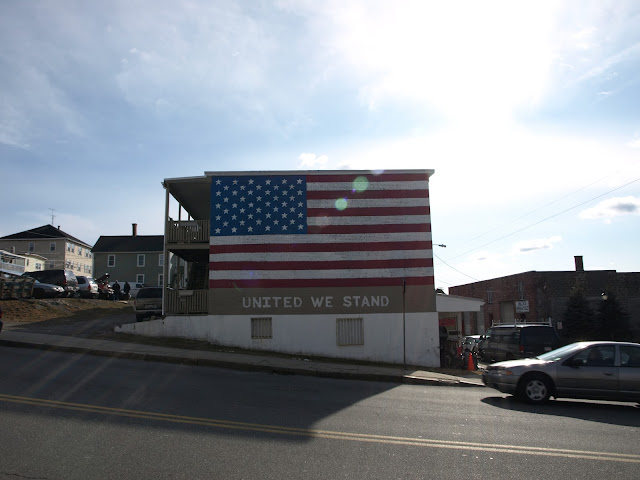 this is the side of a house in lowell, massachusetts. this is not an uncommon sight in the usa, i have seen them smaller, and a little bigger (but mostly smaller), but i never managed to take a photo, usually because we were driving by and i saw it too late. here i made tim stop (and we were a bit lost, so it was a good opportunity to look at the map). i thought it appropriate for today, as it is presidents day, a federal holiday in the us.
this day was implemented in 1879, to honor george washington, the first american president. it was originally on his birthday, february 22, and was also the first holiday to honor an american citizen. it was then named washington's birthday, and thats how it is still described in the american law that describes federal holidays. but from 1971, presidents day has always been on the third day in february, as dictated by the Uniform Monday Holiday Act. i find that very funny. the uniform monday holiday act (i dont think they call it UMHA, although americans love these kind of acronyms). i guess thats american regulation and efficiency all in one! as such, many american holidays are always on a designated monday, so that americans then always have a 3-day weekend, instead of some random day off in the week (perhaps also to prevent people from taking off more days in order to MAKE it a long, even longer, weekend?).
presidents day... i do find it complicated... although by law its still named washington's birthday, its now more known as presidents day, and supposedly more regarded as a day to honor the office of the presidency rather than a specific president. ah well... not much honoring was going on at our place, we got earlier than normal, to be at the dentist at 8 (yuk), then groceries, then major housecleaning (beehh, not done yet), then some work and then it was evening again...
for more monday murals, go here!
Tweet
Pin It
Labels: driving around boston, graffiti, real americans, tradition, very american
Posted by CaT at 10:33 PM

I have a weakness for these patriotic scenes. I like your photo, especially with the sunrays!

I simply do not understand these patriotic scenes that the Americans so like. For us down here in Australia, we are turning away from the Monday holiday because the meaning of the day is lost in the joy over a public holiday. Imagine if the 4th July holiday was held on the nearest Monday ... it isn't is it??

Can't imagine you have this on your wall for ever. It is uncommon for us to be so patriotic. Sometimes US is a bit weird.

july 4 is indeed always on the 4th (although i wondered about that too). however, if it happens to fall on a sat or sunday, you do get the monday (or friday?) off, so that you dont miss out on an extra day... (thats the only good thing about it, haha. in the netherlands it doesnt work like that, for example).

and yes, i think many people dont know the meaning of some of the days off. then they wish each other a "happy memorial day", while in fact it is a day to remember those who died while in service for the nation....

as we are always working at night and in the weekends, i think ill take some random day off next week.

This kind of U.S. patriotism sometimes seems like sports fanaticism to me, more like "my team is bigger and better than your team" than the nuances of who we are and what it means. The flag is made to look more like a team banner. I don't get it. It's fine to be patriotic, but I don't get the point of making it so in your face.

the flag and all... i just dont know anymore. at first i was extremely surprised to see sooo many flags around everywhere, and on top of that all those painted flags and decorations and what not. but i started to get used to it, it surely is not as surprising to me as it was in the very beginning...

Patriotism in small doses is good. In large doses it becomes nationalism or fascism. While one can be proud of one's country, it can be done in gentle ways. Hoisting up a flag for 4th of July or President's Day would be fine with me, but this is a bit much, I have to agree...

You will never see anything like this in Sweden.