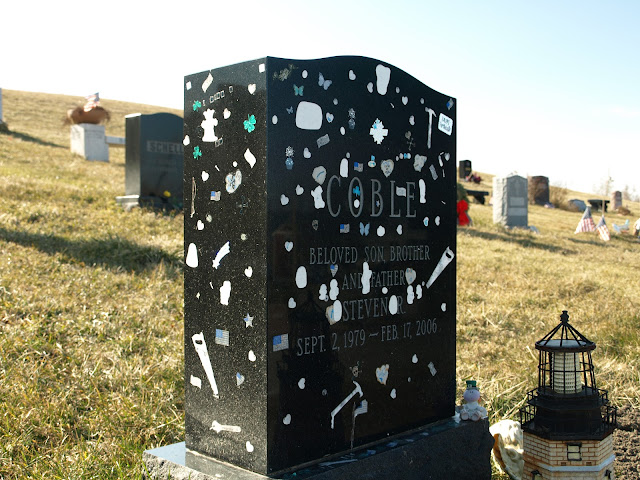 i dont know how to start this post. i guess by telling which cemetery we visited, where, and why. it was this saturday, and we went to hull. we planned on going there this weekend, but only if the weather would be good. the weather turned out perfect, and off we went... we have been to hull many, many times in all kinds of weather, and i never get bored of it. it is a bit of a drive, as it is at the far end of a peninsula in the massachusetts bay (by boat its very close to boston actually, but the ferry only goes during the week :(. i have posted many pictures of hull on this blog (here, here and here, for example). the indians called the area nantasket, which means low-tide place. hull history means lifesaving; their lifesaving post, opened in 1889, saved 1000s from shipwrecks. yet 19 to 30 people still drown around hull every year.
last year, we discovered the hull village cemetery. we literally drove right into it. its situated on a hill, overlooking the ocean. it was the first cemetery i ever saw with such an amazing view.... i think i will dedicate next week's post to this cemetery as well, so that i can show you how beautiful it is. this week i want to show you just one grave. it was in the newer section. usually i avoid the "new section". all the stones are uniform, as are the rows, perfectly aligned. but not so in this cemetery. many stones had very personal messages engraved. the above one had one too, but of a different kind... and then i saw the age of this person, steven coble. only 2 years and exactly one month older than me, yet by now i am 4 years older than he ever got...
of course i wondered what happened. but this is not some ancient grave. was it ok to google around, and find his story...? eventually i did.... and it just made me sad. the missing persons site told me that on feb 16, 2006 around 11 pm, 26 year old steven coble and his 18 year old cousin went fishing. their canoe capsized, and while the cousin was found hours later shivering on a rock 65 yards off the shore, there was no sign of steven. in another newspaper i found that only on april 18, steven's body was found in the waters of hull. a sternman on lobster boats, he loved the water and fishing. he had 2 daughters and was engaged.
these are "facts". i just found them on the internet. but the stickers say so much more.

The stickers are a new phenomenon - never seen anything like that before. How sad, but I feel as bad for his cousin who must have felt so helpless

A heartbraking story, did they really glued stickers on the stone? I thought it was carved in the stone. It is a very personal grave and he must have been loved very much.

But the weather will eventually wash the stickers away. Then it will be even sadder.

He was a stern man on a lobster potter. But he also must have been a handyman, judging from so many of the stickers being of hammers and saws and the like.

Yes, it would be good for you to go back to this cemetery for you post next week. I so want to see what they view is that this people have 'signed up' for. *grin*

Isn't it astounding that we have so many people with Dutch ancestry posting to Taphophile Tragics? I like this.

I so remember when this happened. It was very sad. I can't believe it's been 5 years already.

I picture his little daughters putting the stickers on the grave. I can only wonder why anyone would go fishing at night in February in a canoe. Even if you're a great mariner it doesn't make a lot of sense.

envisioning the daughter putting a sticker every so many days or weeks is really touching..

Very touching, especially that the stickers were put there by his daughter.

Your post today is absorbing, as is the photograph. We have much to imagine, about who places the stickers and why, and who else visits the grave regularly.

Interesting marker and interesting post! Sad that he left two daughters at such a young age.

i also never saw a grave covered in stickers.. but as soon as i saw it, i imagined a little girl going there every so often with her mom, putting one or more on, probably the nicest she had.. and it just made me sooo terribly sad. but so beautiful too...

Such a sad but beautiful stone.

Not many headstones get changed, but perhaps this one has a new 'design' every time the family come to visit.