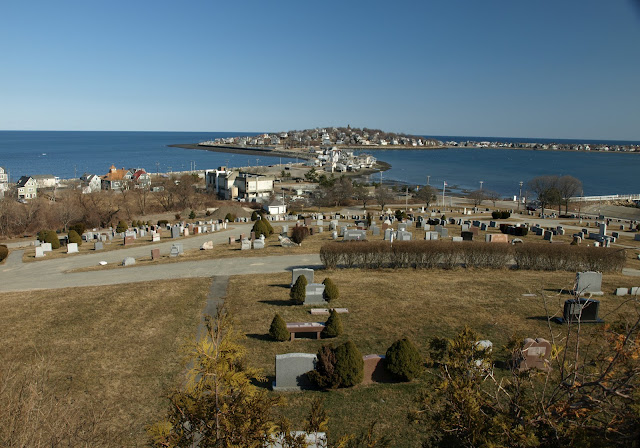 so... this is the hull village cemetery, from which i showed you one grave last week. right in front of you is the "mixed-faith jewish" section, which is there since 2008. its for "interfaith" couples who wish to be buried together (as opposed to the consecrated jewish section, where only those with the jewish faith can be buried). to the right (not on the pic) are the oldest graves, from before 1900, also facing the ocean. down to the left are the newer graves. the remainder is somewhere in between old and not so new.. i liked that the graves here are not really placed in a strict pattern, but more scattered, with quite some space between them. you are allowed to drive on the rather narrow paths, but i keep finding that weird and interfering (especially on this cemetery that is not that huge), so we parked somewhere else. if you drive down here, you get to nantasket beach, which is very nice, especially in summer. but if you were to turn around, you will find a little path through the bushes and some steep concrete wall. the first time we were here, i was very curious what was there, and without telling tim, i just went up and discovered an entire abandoned fort! i felt kind of like an explorer, haha, except that i was not the first going there and my journey was not very long or with many hardships... the fort is in a really bad shape, and almost entirely covered in graffiti (more about that fort some other time).
here you can see some more pictures of the cemetery that i posted on flickr. there were interesting stones, beautiful personal messages and funny names or combinations that i could not ignore.. :)
for more taphophile tragics, go here!
Tweet
Pin It
Labels: beach, cemetery
Posted by CaT at 11:28 PM

This is an amazingly beautiful view of the township from the cemetery. And such a clear outline of the geography of the promontory. I love all those little houses (and some not all that little) around the town. They appear to be made mostly of timber. They remind me of the images in my head from the novel 'The Shipping News'.

I have gone through and added some comments on your Picasa images, Cat. That letter H is a very wierd thing to do for one's eternal rest.

What a great cemetery, so beautiful situated at the water. Yes that the graves are not so patterned, I like that very much. Here mostly everything is so lined. You live in lined houses and when you are dead you are lined again at the cemetery.

What an amazingly beautiful cemetery. Such a lovely view.

haha, biebkriebels, you are right. its a bit sad..!

and julie. i never thought of the shipping news, but now
that you mention it.... yes. especially one of my flickr pics with the small islands and the lighthouse in the back. but still there are too many houses. in my imagination its more empty and the nature more wild... tim is reading the book right now, so i ask him about it, as i forgot so much of it already.. :( it did make me want to visit newfoundland, im very curious how it looks there in reality. must be amazing...

This is a beautiful setting. It looks like a pretty place.

My image of the Shipping News is more stark than this, like what I've seen of coastal Maine.

Having been to Newfoundland where 'The Shipping News' is set, it is definitely more stark than the above. Beautiful, but stark.

Thanks for including the album of pictures. It's nice to get a closer look at some of the markers. But what the H were they thinking with that giant 'H'?

A tomb with a view! :-) What a wonderful setting.

i pictured newfoundland as a place where the ocean is ever-present, everything is done by ship in the pooring rain, and all the people are local fishermen, tough like wolves. The women are made of steel and do not care for luxury, and there is a general criticism of anything foreign. Also, they eat the most disgusting food, like squidburgers and microwaved potato and cod brew. And the coffee in the bar has an acrid taste of fish. Ehm, so yes, it cuold be a bit like hull!! :)

its such a lovely cemetery, it would be an adventure to hike up to the highest level for sure!!

Another of your excellent photos and absorbing posts. Hull is little visited by most people in greater Boston. I am fascinated that you return to it again and again.