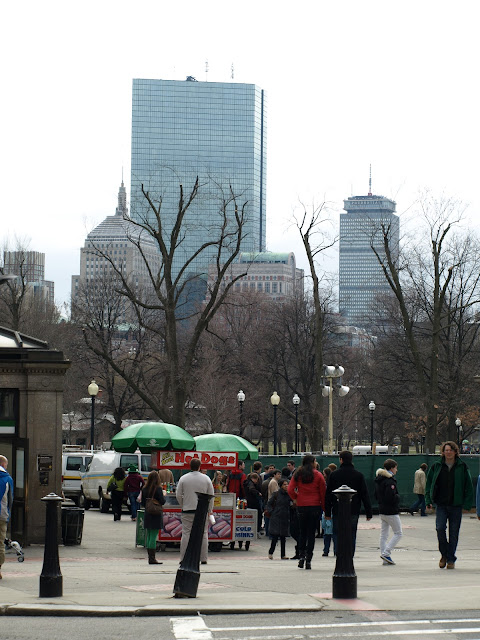 march is not yet going into april and i already took almost 1000 pictures... i was just going through them, and hoped to find one to post. some were dismissed because they were ok, but not ok enough. some because i am too lazy to write something about the pic, but i dont want to post it without writing that something. some because it takes too much time to find info about it at this very moment. some because i cannot choose between several shots. some because my computer is too slow and does not listen to me.
i settled for this one. i liked the bare trees in front of the hancock tower (left) and prudential (right). to the left is the entrance to the park street subway station, and to the right is the boston common. the green fence is there because they are doing some major (re)construction to the park. since months already.... theres always a hotdog stand, and often other (fried) food as well, a stand that has boston t shirts, and there are quite some homeless people sitting around here, usually. i never bought a hotdog at a stand, and i think i never will. somehow i dont trust food from such stands, not even in new york! (or especially not in new york... ?)
Tweet
Pin It
Labels: boston common, boston streets, food, photographing strangers
Posted by CaT at 11:41 PM

i love the hotdogs in london on the streetcorners.. but you would hate them. very greasy and weird-looking.

I like the post (bollard) in the middle that is tilted over to the side. It makes a nice contrast to all the upright lines.

I've read about many west coast food stands having very good and trendy food. Mostly they're in trucks that have more control over the cooking environment. Stands like this don't look too yummy to me.

Always those hotdogs, is there nobody who can start to sell a "patatje"? I even saw in the Vondelpark a hotdog stand! You can imagine to live in Boston here with the Starbucks, Apple, Mac Donald and the hotdogs.

Great shot. I like the way you have superposed the bare trees against the skyscrapers.