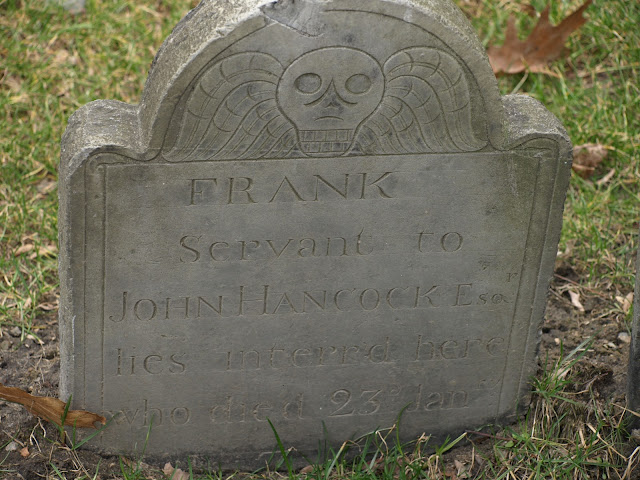 there are 2 very touristy graveyards in boston, very close to each other. although we live here now almost 2 years, we had not been to either one, yet we have passed them many, many times. the sheer number of tourists made us just walk past them, every time. even though i have always liked to visit cemeteries. i guess i just like to be the only tourist, instead of being surrounded by many others...
but this st patrick's day we finally went to both! the above marker is at the granary burying ground, close to the boston common. it is the final resting place of many important americans (thats why it is a tourist hotspot); paul revere, benjamin franklin's family (he himself is in philadelphia), samuel adams, and john hancock. to be honest. i know all these names, but i couldnt tell you exactly what they all did/why they are important. is that bad? perhaps so... do i want to know? yes! but not tonight... :)
anyways.. to me the most striking grave was the one above. frank. servant to john hancock. only that. googling just that gives you many hits, and similar photos as mine, as well as many questions about frank. who was he? was he married? was he happy? what did he do? but no answers... :( one thing i did not realize when i saw this grave; the fact that he is there at all is a sign that john hancock probably held him in high esteem (this was 1771!!). franks grave is right underneath the big obelisk for john hancock (as you can see here), which was erected 100 years after his death. moreover, john hancocks tomb does not say anything about him either. no "first signer of the declaration of independence", just this: "No. 16 tomb of hancock" (unfortunately i have no picture of that).
some other time more about the graveyard itself, perhaps. now its time for bed and tomorrow some history lessons through wikipedia for me.. ;)
more taphophile stories? go here!

It is also interesting that there is no year listed.
He must have been a loyal servant of long standing, I would assume.

Frank usually washed his horse, which was back in that time a very important service. One of Hancock's famous sayings: "Nothing is worse, than an uncleaneth Horse." Of course Franks responsibilities also extended to mowing the lawn, making Hancock's favorite cookie-dough icecream, and dancing.

i saw somewhere he died in 1771. perhaps it was on the back of the stone? (i forgot to check!).
i doubt they had cookie-dough icecream....

Apart from his signing the Declaration of Independence, I know very little about him either. I wonder where his wife is buried?

Well, an interesting person that Mr. Hancock, did Tim do some research about him, or is he joking?(again) I like the quote about the horse! That poor Frank, just such a simple stone, as his boss has a whole tower in the city and that ridiculous obelisk.

Poor Frank, not even a surname to grace his headstone!
Interesting how in those times servants were just part and parcel of one's chattels...

@hamilton; i think i read last night that his wife remarried and is buried somewhere else, but im already not sure anymore about that..

Chattel he was. The stone is all about John Hancock, Esq and nowt about Frank. My guess is that Frank was a negro. Keep your possessions close around you even unto death.

I do like the font that the mason chiselled.

The Granary Burying Ground is a wonderful name for it. Perhaps it was a silo in a previous life, or a ploughed field, more like.

One of the links you provided took me to someone's post where she has catalogued (from pre 1825 grave markers) 101 ways to say 'died'. See, you and I are not the only wackos in the world!!

Another marker to raise interesting questions. I'd find this more compelling than the grave of someone famous.[CaT, I came here last week, but either Blogger or the anonymous proxy I use to bust though the China firewall was not letting me leave a comment.]