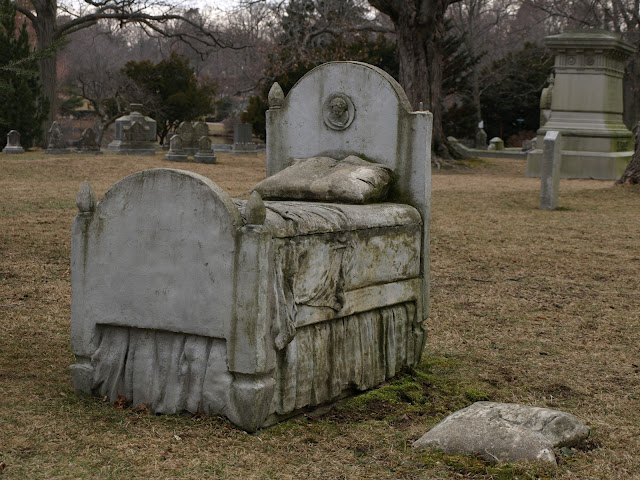 2 weeks back we went to the forst hills cemetery in boston. it is not too far from the very last subway stop on the orange line (forest hills), 18 stops from the very first subway stop (oak grove), where we live. luckily, we went by car. this cemetery is huge! there were big fields with graves, surrounded by paths of which most were accessible by car (this time we drove around a bit by car, it simply was too big). there were small and big graves, ugly and beautiful. a beautiful landscape, hilly terrain, many trees, a lake and a pond with waterfall, and several sculptures.
this cemetery was established in 1848. apparently inspired by the mount auburn cemetery, of which i showed you pictures earlier. this cemetery seemed so very different to me. even more spacious, and many beautiful graves. many angel sculptures, too. something i havent seen much around here in boston! not just the boring grey stones of which i have seen so many by now. each grave was different. only the weather was very grey and that made it hard for me to take good pictures. this was also the first cemetery that invited you to have a picnick (they even suggested the lake as one of the best spots), or to walk your dog, or just bike around. provided you are respectful, of course. i really liked that, as most cemeteries list those things as "forbidden".
i was very much impressed with the grave above. there were actually 3 of these tiny beds. there were 2 right next to each other, and one a little further away. however, there were no names, info or anything. i assumed they were as old as the surrounding graves, given their weathered look, and i was very touched by them. the little pillow on the ground, the young boy or girl their parents lost...  wrong! ....its contemporary art.. :( i just found out these 3 beds were placed in 2001, by artists lisa osborn and danielle krcmar. they are supposed to be functional benches. i dont know what they mean by functional. am i supposed to sit on them? they chose the bed for its central role in the life cycle, as it is the place of conception, birth, marriage, rest and death. hmpff... (thats all i have to say about it now, i still dont know what to think).
there was more art in this cemetery, something i had never seen before. and some i really liked! maybe i will show it to you tomorrow, or next week... :) surely it was a special cemetery and we saw only a small part of it, so we will go back, when the sun is shining. here a few more pics, and here are the other taphophiles!
Tweet
Pin It
Labels: boston sightseeing, cemetery
Posted by CaT at 10:56 PM

Oooh, this looks so special, I like it very much. I first thought indeed it was a grave, but as art it is amazing.

i liked it better when we thought they were graves... haha

Sometimes artists get away with some pretty weird stuff.

I'm not sure what to think either... but it doesn't look terribly out of place. I thought it was an elaborate grave, too.

I'm almost relieved these are contemporary pieces. My first reaction was they were too macabre for me.

If it has been there since 2001, I for one, would not classify that as temporary!

But I do like it. I think it a great idea for a grave marker. Nothing can be goulhish in a cemetery - the joint is full of dead bodies, for heaven's sake! Its very essence is goulish!!

Are these a bit 'high' to be used as benches? Of is it just that I am height-challenged ...

I no longer drive, and have to train/bus/walk everywhere. This makes our main Sydney cemetery (Rookwood) a major challenge ... but anything for my art.

and julie; they are tiny, like a child's bed. you cannot really see that here, unfortunately. but that is why i liked them so much.

i wonder whether they were intentionally made of a material that quickly got an aged look..

I dont think it would be very comfortable and its cold as stone Im sure...
ITS is although beautiful...

Flickr may have been hacked. The CDPB portal has been hacked, too. About 10 days ago.

Looks a bit uncomfortable as a bench, and high (I'm also vertically challenged) but I think it would make a terrific grave marker.

I liked it better as a childrens' grave marker than as art. It does seem tall to be a useful bench.