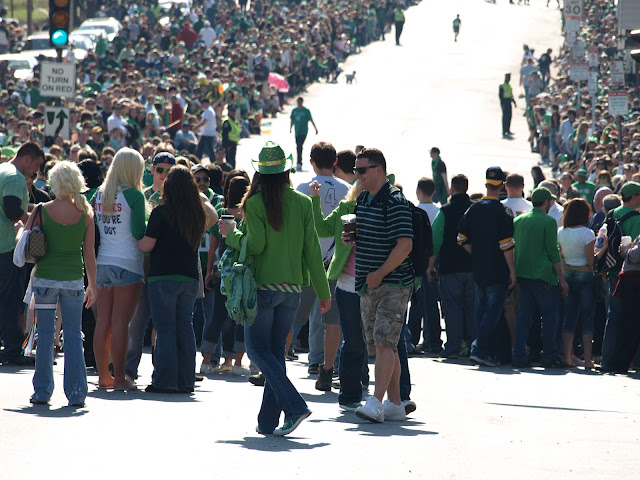 as you can see, there were quite some people watching the st patricks day parade yesterday (it was 3 miles long. some places were more crowded than others. the crowded ones were quite annoying to get through, but at some point we really just wanted to leave..)
this was the damage; 8 arrests and 244 citations for drinking in public... why dont they just allow public drinking?! i dont really get that. many were drinking anyways... if they catch you carrying an open can/bottle of alcohol, thats sufficient proof that you were drinking in public and you can get a ticket (so the police does not have to see you doing it... (the actual drinking)). only sometimes drinking in public is allowed, or only when its in a bag (like the brown paper bag you always see in the movies, haha). there are actually a few places in the us where drinking in public is allowed (here you can see where).
the police blogged about their arrests, if curious, you can look at that here. they describe the situation, as well as the full name, age and hometown of the arrested person. i especially like the title of their blog post: "if you got arrested at this year's st patricks day parade, you probably did something to warrant it."
probably you did....
Tweet
Pin It
Labels: boston streets, emergency services, photographing strangers, tradition
Posted by CaT at 11:13 PM

I know there are a lot irish in the US but so many.

Great photo! There can't be that many Irish people in the Boston area, right? :-) Hope they had fun, I'm glad I wasn't in the middle of this crowd.

A lot of people and it looks so warm! To arrest a person with an open can or a bottle alcohol is not so difficult I think in such a crowd and warm weather. But at least they were warned. I think here the police had to arrest the whole population of Amsterdam for that.

im glad we got away with our open container of ginger ale and snickers bars.

St. Patrick's Day was always lost on me. I'm not Irish and I don't want to pretend I'm Irish. :-)

That's just too darned many people for my comfort.

Boston would be such a great place to be on St. Paddy's Day.