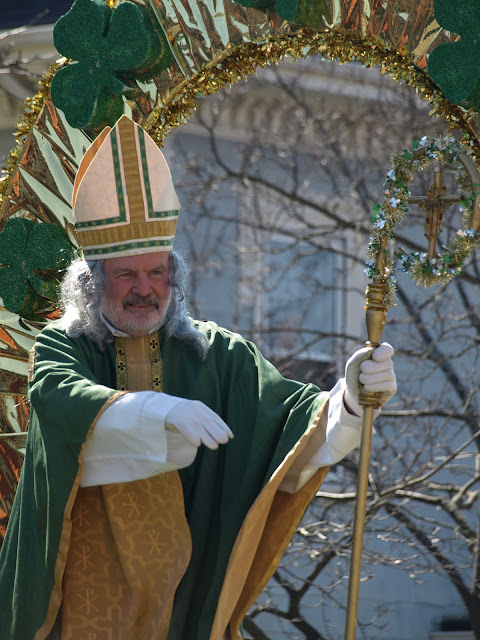 i guess saint patrick lost some weight and grew his hair, as compared to last year...
reading wikipedia, im not sure that the early years of his life were that great. when he was 16, he was captured from wales and brought as a slave to ireland, where he lived for 6 years, and then managed to escape to go back to his family.
today the weather was amazing! it was so warm i did not need a jacket and i regretted wearing stockings. i even got a little sunburn! we walked along the shore in dorchester, and then went to the parade for a bit. tim initially did not want to go, as we saw it last year already. and well, yes, it was basically the same. lots of parents with kids, and then many many young people walking around with lots of beers. pretending not to drink them, of course, since thats not allowed in the streets. it all reminded me a bit of queensday in the netherlands, but instead of green, everyone wears orange on that day (after the last name of our queen "van oranje", i.e. "from orange"). also, drinking is allowed and nobody cares about their trash; when the day ends you walk on streets newly paved by plastic cups (i dont really like that day.... and usually just went to do some work in the lab although its a national holiday).
ah well, we had our dose of real irish culture and boston tradition and so on..... and a lot of sun as a very pleasant bonus!
Tweet
Pin It
Labels: boston sightseeing, boston streets, photographing strangers, tradition
Posted by CaT at 11:21 PM

I would almost believe it is "Sinterklaas" in a different colour. Each country has its own folklore, but the drinking is everywhere the same I am afraid. But at least in the US it is inside and not so public on the streets as here, which is becoming an increasing problem.

The weather was amazing! Did you also get hit by the green lollipops St. Patrick's little helpers threw around?

No matter where you are, it's a fun day...up to a point! I doubt that it can be classified as "real Irish culture" though.

I think this year's St. Patrick is dressed a little better than last year's.

Why is it people don't give thought to tossing their trash? Maybe they believe there are little fairies that are going to come and pick it up for them?

Fun photo Cat:-)
And like Biebkriebels I think he looks a little bit like Sinterklaas, haha. But that's a long time from now, first we are going to enjoy the spring and summer!!

This fellow is a great St. Pat imposter!

Ha ha, so that is how he looks!