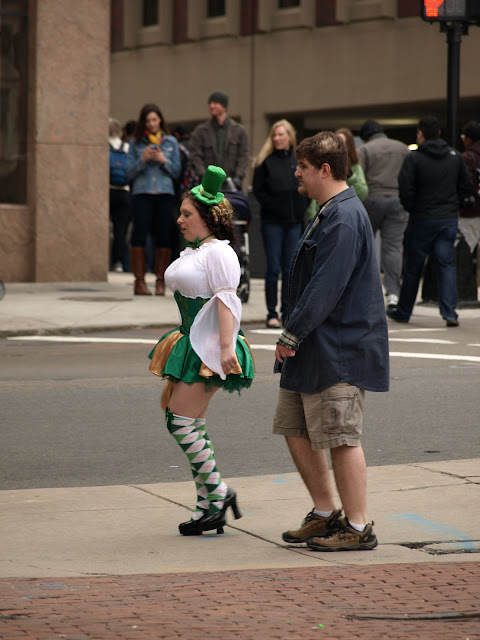 today its st patricks day. according to wikipedia, it is a cultural and religious holiday, celebrated on march 17, commemorating saint patrick (AD 387-461; he died on march 17). in the early 17th century, it became an official feast day, and gradually became a celebration of irish culture in general. on this day, you goto church, you wear something green, and the lenten restrictions on eating and alcohol are lifted.
now... if you just look around in boston during st patricks day..... you see more of the above. im so frustrated this pic not sharp, but well... you get the idea. im not sure those 2 went to church, or were celebrating irish culture that much.... it seems to me its just a day spent in the pub (or waiting in a long line to get into one), and getting drunk in a weird (or weirder) green outfit...
Tweet
Pin It
Labels: boston sightseeing, boston streets, government center, photographing strangers, tradition
Posted by CaT at 12:29 AM

I must admit. The only irish I see is the green color but everything shouts party. As such its succeeded. Funny shot.

The Irish population in many U.S. cities increases on this day. Like her hat and her colorful garb.

Check out the St. Patrick's Day Parade on W Broadway this afternoon (March 18th, 1-4PM), you'll see a lot of green - and drunk - people. Every year around 600,000 people come to Boston see this parade with floats, marching and bagpipe bands...

Well she looks really "Irish". Very nice photo! This looks more like carnaval. The boy just only has to drink to be Irish? No green at all.

the parade is fun, we were actually there last year, check out cats blog for several posts about the parade!

on the whole, i think st patricks day is a celebration of vulgarity, garish outfits, an excuse to get drunk and make an ass of yourself. the green outfits are generally disgusting and whorish and degrading (as you can see on this photo). it's cross between Octoberfest and the IRA. people get drunk by noon, many get arrested for lewdness, spiked slushies get confiscated, and brawls ensue.

I'm afraid Tim has nailed it. Last night I saw a woman in a bright green sort of clown wig. I think these sorts of celebrations are uniquely American. Among other things, I've been to Ireland twice and never seen corned beef and cabbage on a single menu. Lamb stew, yes. And most of the drunkeness and pub crawls were nonIrish.

ah, it reminds me a bit of the dutch queensday on april 30.

they do the parade in boston since 1804, i just read on my post from last year. but we were there first only last year. didnt count the people, however...!

Look at those boobs -- I mean stockings!

No such celebrations in my area, but I did enjoy a Guinness on this day.