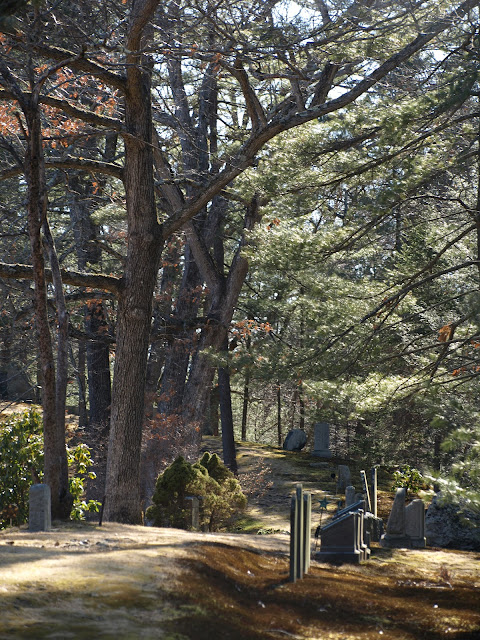 last week sunday we were indecisive of what to do. i cannot remember a day off that we stayed home, but sometimes it takes some time to decide on where to go/what to do. museum? beach? mall? eeehhhmm... cemetery? i guess tim was convinced when i mentioned this cemetery is named "sleepy hollow" (sleepy hollow is famous because of the tale by washington irving, "the legend of sleepy hollow", after which tim burton made a movie, which we both like a lot and watched again this weekend (also because its with johnny depp...). the original sleepy hollow is in the state new york).
this cemetery is in concord, massachusetts, a 30 minute drive from boston. it was pretty chilly, but very sunny, and before we knew it, we spent nearly 3 hours on this cemetery! there were many interesting graves, old and new, it was rather big, but mostly, it was just so beautiful. it was named sleepy hollow before it was a cemetery, and locals often picknicked there. among those were nathaniel hawthorne and his fiancee (later wife), who actually dreamed of building a castle there. but...  in 1855, with a speech of waldo emerson, it opened as a cemetery (both hawthorne and emerson were later buried on this cemetery).
perhaps you agree with me that the above picture is more a lovely place in the woods, with some graves. and this is how this cemetery was "designed". or rather, not designed. much of the original vegetation has been left in place, and the graves were more or less just placed in the natural landscape, in line with the transcendentalism movement that developed in new england between 1830 and 1840 (that wikilink is actually a quite interesting read!). many of the major figures in this movement are buried in sleepy hollow. we saw the graves of hawthorne, emerson, thoreau, alcott and channing, among others. some you can see here on my flickr page. but there were more interesting graves, which i will show you next week!
for other taphophiles, go here...
Tweet
Pin It
Labels: cemetery, driving around boston
Posted by CaT at 12:05 AM

This looks beautiful indeed, can imagine you spent 3 hours there. Just have a walk and so now and then spot a grave. We once visited the home of Hawthorne in Salem, very boring and expensive with a terrible bitchy guide. Haven't read his books.

I will respond to your direct question first, CaT.

I have read 'The Scarlet Letter' by Hawthorne, but many many years ago. It is similar to works by Charles Dickens in style. I really enjoyed it. It is the trials and tribulations of a woman caught out in adultery who has to walk around with a large red letter A on her coat. It is on the bookshelf in my living room.

I am a bit of a poetry lover, so know the works of Emerson quite well. Not as well as Walt Whitman, but of the two, I think Emerson the better poet. The collected works of both are on the poetry shelf behind me here in my study.

I have read Thoreau's 'Walden'. There are some interesting reflections in it, but he has been overtaken with newer ideas. He is also not a very good writer. However, Walden is also on the shelf in my living room.

I have not read any of the novels by Louisa May Alcott. None of them.

And your final name, Channing, I know nothing about.

'Sleepy Hollow' is indeed, a very beautiful wander through a wood. So different from any cemetery I have experienced here in Australia. It is also apparent that it is often covered with snow. We have very little snow here. Very little.

There does not seem to be any organised pathways between the plots, or even any organising of the plots into rows. They just appear to be scattered. This is quite attractive, but must be annoying when trying to find a specific gravesite.

The ones you have shown on your Flickr site, do not seem to have much religious symbolism at all. Our cemeteries where people are buried are full of religious symbols and sayings and statues. Very different.

I look forward to more next week.

Also, at some point, you asked about any well-regarded people working in your field who are Australian.

All I know of your field is that it is Science. Tell me more details, and then I can think about who might be well-regarded in this field who are Australian.

I can see how three hours would flit by in a place like this. I'll be sure to check in next week for the follow-up!

What a beautiful and peaceful place to spend all eternity.

Beautiful shot, CaT, of what seems to be a delightfully peaceful and serene cemetery.
Interesting literary associations you have mentioned...

This looks very un-cemetery like! A 3 hour wander does not sound very long... looking forward to next week. I read Hawthorne in high school - can't remember if I like him or not.