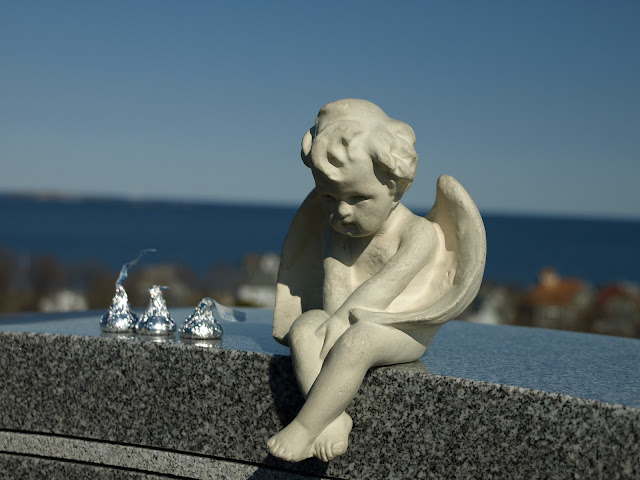 ooh, hershey kisses, how beautiful are they! their form, the silver wrapping, and the cute piece of paper sticking out saying hersheys... in 2004, i was in the usa for the very first time. when going back, i brought 2 big bags of hershey kisses. they were so pretty, and i was sure my parents would love them. months later most of them were still lying around. from the outside still pretty... but now i knew how they were tasting; literally disgusting!! this wasnt chocolate!!
but when i saw them a few weeks back on a grave on the hull village cemetery, next to this adorable angel, i almost wanted to run to the store and buy me a bag... then i remembered their taste again...
so.... i googled "why is hershey chocolate so disgusting?" i was not expecting any answer, but i often google weird questions to be surprised by the (sometimes very useful) answers google gives me. to me, hershey kisses taste ok at first, but then suddenly it tastes like something is not quite right... going to downright disgusting. apparently, im not the only one.... and now i know why; the hershey recipe uses milk that has gone sour (i.e. has gone bad (instead of using buttermilk or cocoa butter)) in their recipe, making it taste.. well yes... like vomit...
i guess most real americans might not taste the vomit, as they are used to eating this chocolate (its like feeding someone something with a weird/distinct flavor from a very early age... you do get used to that..). but no more hershey kisses for me! :)
Tweet
Pin It
Labels: cemetery, driving around boston, food, real americans
Posted by CaT at 11:36 PM

I never ate hershey kisses, but now I know I never will.... Nice photo :-)

Wow, that's amazing Cat, I must admit I've never tried one, I probably would still be curious enough to give it a go. Just goes to show you can't tell a book by it's cover so to speak!!

This is such a great photo, I love it! I have never heard of the hershey kisses and never tasted one. But it sounds bad, I am a huge chocolate-lover, can't imagine to use sour milk for it, yek!

Never heard of hershey kisses before but they surely add so much to the lovely composition.

:)
funny that only one commenter tasted them..
i think it is actually not even worthy of calling chocolate, manon! beeeeegghhh

It's almost, but not quite, entirely unlike chocolate ;)