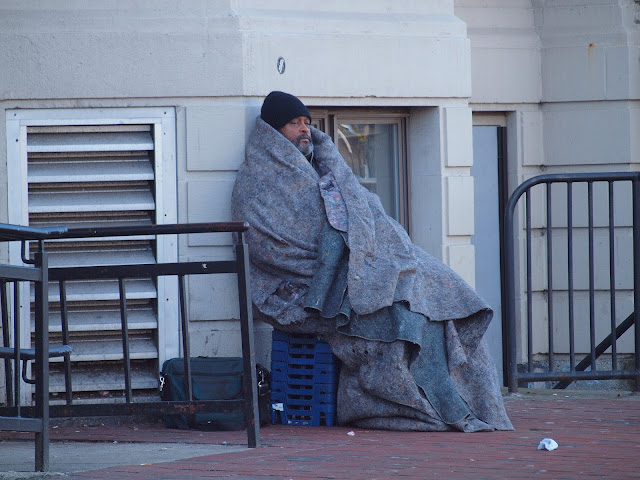 this man was sitting in his blankets somewhere on commonwealth avenue (i think) in boston, close to the mc donalds. he was just sitting there, and not asking for money (at least at that moment), as most others do. unless, ofcourse, they are sleeping...
i recently learned that such a person is called a "tramp". i thought that was slang, but it is described in the massachusetts general law (Chap. 272, Sect. 63)! the definition of a tramp: "Whoever, not being under seventeen, or a person asking charity within his own town, roves about from place to place begging, or living without labor or visible means of support, shall be deemed a tramp. An act of begging or soliciting alms, whether of money, food, lodging or clothing, by a person having no residence in the town within which the act is committed, or the riding upon a freight train of a railroad, whether within or without any car or part thereof, without a permit from the proper officers or employees of such railroad or train, shall be prima facie evidence that such person is a tramp."
hahahaha. clicking further you learn what the punishment is for being a tramp, and i now also know what a "vagrant" is and a "vagabond", as well as their respective punishments... hahahaha.
there are quite some homeless people in boston. some more annoying than others.... recently one got mad when w refused to give him "some change". well... maybe he should change a little first...
Tweet
Pin It
Labels: boston streets, photographing strangers
Posted by CaT at 10:26 PM

Whatever name he has, it is still a shame that in rich countries some people can't make the connection and have to live like this. It is a worldwide problem I am afraid.

giving them money confirms them in their status. do NOT give them anything..

The definitions can be straightforward, the reasons for it can be far more complex.

It is always sad to see homeless people being reduced to such a state and depending on people's charity to survive. There is something to be said in favour fo the welfare state, but more important I feel is government policy that creates jobs and limits poverty.
Great shot.