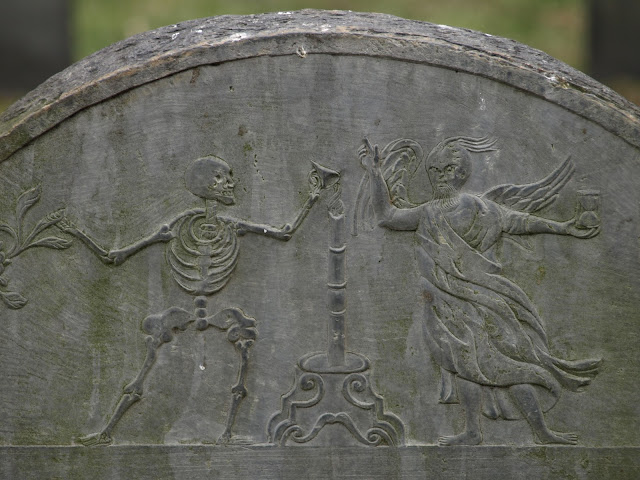 as i may have mentioned before, there are not that many statues of angels and such in most of the cemeteries i have been so far around boston. by now, i actually have been to some where they do have statues, but the very old ones in the center of boston have none. instead, i noticed that the graves have often beautiful motifs on the stone itself, below which there is a short text listing name and (often) the exact age of the deceased (e.g. "49 years,  5 months, 12 days"). when we were at the most visited graveyards of boston, i actually mostly focused on the imagery, i see now. above pic was taken at the king's chapel burial ground, which is very close to the granary burial ground where servant frank is buried, as i showed you last week. the kings chapel burial ground is the oldest burial ground in boston, established in 1630. many headstones had toppled over and/or were broken, and visitors were asked not to walk around the graves, but to remain on the path. many english puritan colonists are buried here (as well as the first girl to step off the mayflower (she was only 13 or so! actually the wiki-entry is quite interesting..)), and that is probably the reason for the absence of angels and stuff; puritans did not believe in religious icons or imagery. so instead... the people of boston used the headstones to display their creativity and ideas about afterlife. the most popular image was the soul effigy; a skull or head with a wing on each side that is a representation of the soul flying to heaven after death. or like above; an image of death and father time. i thought it was really beautiful, and so well preserved!
i have to admit i do not even know whose grave the above image belongs to. i was too focused on that image! i uploaded a few more pics on flickr from both burial grounds, as you can see here...
for the other taphophiles; go here.
Tweet
Pin It
Labels: boston sightseeing, cemetery
Posted by CaT at 11:24 PM

Well, you did find some cherubs carved in the headstones, or were those from another place? I find this image here of the skeleton with death bell and father time a bit gruesome... but I suppose reality is just that. One person's "waste of time" is an other's joy... who's to say?

I'm afraid that skeleton is a bit too realistic an image of what lay beneath fort me!

You made some beautiful photos of the cemetery, I watched your Flickr too. The skeleton looks a bit too realistic to me, but the wings make a balance with it.

No matter what the others have said, I like this skeleton. I do not find it at all gruesome or offensive. Strange, isn't it. I would love to find more variety on the headstones that I look at. But I have many more to walk among yet, so have not given up.

It is surprising to me that the Granary and King's Chapel are so close together, and were not moved further away from the city as the city encroached upon the burying ground. This is what happened here in Sydney. All inhabitants of the first two cemeteries were dug up and moved further afield.

Now to go and look through your other images ...

Pretty amazing detail for work in stone and I'm guressing there weren't any power tools around when this was carved. It looks to be in quite good shape. I was looking at some early 20th century gravestones this morning and some were impossible to read - covered with moss. I guess that's the Pacific Northwest for you.

This is a little frightening . . .

THE first person off the Mayflower..wow thats Impressive!
I like this image of the Skeleton dancing with Father time...very interesting. BOSTON Must be ooozing with all sorts of history, just waiting to be discovered.