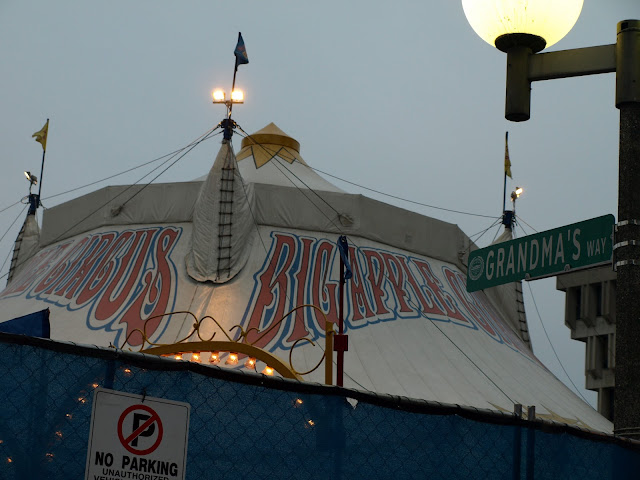 this evening we walked around the brick desert, and i suddenly saw the above streetname. its pointing towards the city hall plaza that i pictured here. empty on that pic.. now it is entirely occupied by a tent from the big apple circus (i guess this tent is allowed, as opposed to the tents from "occupy boston"; anyone ever heard anything from them recently?!). i am pretty sure this sign is new.... really?! grandmas way?! how could i ever have missed THAT?!
so... i just googled a bit. first google maps, but there seems to be no such thing as grandmas way in boston. then i went to google streetview and zoomed in on the above lamp post (at least i think i did); no green sign (btw; can you imagine the world without all these tools?! how did we manage without the internet?!). then i just googled and found someone else who pictured it but no info. back to my beloved wikipedia; apparently in 2001 the big apple circus best known performer joined; clown grandma, (barry lubin) (because of that i now also know there is something like the ISCHOF; the international clown hall of fame and research center, dedicated to the preservation and advancement of clown art and achievement... really?! would they hire scientists like me...?). but... still no answer as to why its called grandmas way. is it always there when the circus is in town?! its in the same style as all the other street signs in boston.... then... i found an article stating that clown grandma is leaving, having been with the big apple circus for 25 years. i gather from this article that this is his farewell tour with the circus. so... i assume it is a tribute to him....?
pfew. im tired of all this research on my free saturday evening... ;) now i would like a confirmation that my hypothesis is right!!
Tweet
Pin It
Labels: boston sightseeing, boston streets, weird sign
Posted by CaT at 1:04 AM

Nice researching. I'm sure that sign belongs to Barry.

You make great researches on the late evening. It must something have to do with the clown, I am sure. Bur quite an honor for him to have his own sign.

A friend of mine has a friend who actually went away to clown school in Florida many years ago and has been a clown since. . .

I can imagine the world without google, wikipedia, etc. The "good" old days before the internet: paper maps, library research using whatever editions of books they had - mostly not up to date, and contact with only the friends who called or wrote letters. Stores or catalogs for shopping. And, oh yeah. Film cameras and film processing. The world was much bigger, slower, and unconnected.