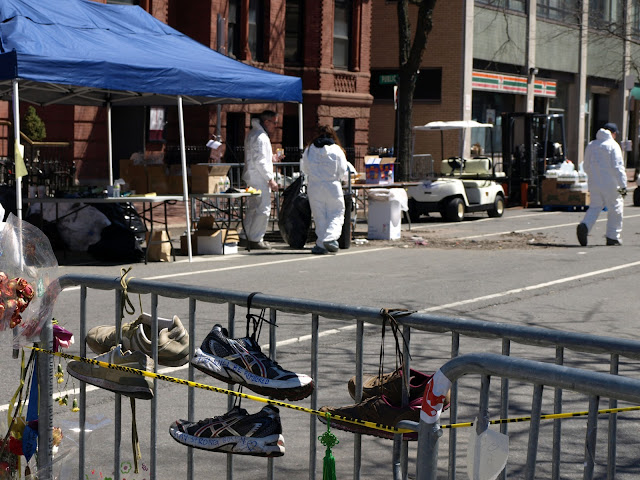 over the past 3 years, i have shown you many "boston streets", but never one like this. and it is beyond horrible that i can now add this one to the collection. even though "they got him", the lives of many people have been changed forever, only because they were participating in or watching a boston tradition. at the same time, every single day horrible things happen, somewhere, anywhere... but we just dont always hear about it (or choose to ignore it, or.... etc). all of that makes it hard for me to write something, as every thought seems so superficial... and who am i? i was not even there monday. nothing happened to me.
during our time in boston we have walked on boylston street, where it happened, so very often. i guess we are so boring..! every time tim and me would walk the same route, in one direction or the other. starting in the boston common, we would pass the public garden (perhaps look at the cute ducklings), get onto boylston, and then just walk until prudential, passing the hancock tower, the public library, and (excuse me) that ugly church. there is also another beautiful sculpture by the same artist as the ducklings one on copley square, "tortoise and hare", which honors the participants of the boston marathon. it has been there since 20 years and i still did not get to posting it as i never managed to take a good picture of it. today, most of that part of boylston was still closed off, entirely, and they were still collecting evidence, as you can see. at various places, people had placed flowers, running shoes, notes, etc.
i walked on newbury street today, which runs parallel to boylston, and i realized that in these 3 years we hardly ever took newbury as there was just so much to see on boylston.
Tweet
Pin It
Labels: boston streets
Posted by CaT at 12:36 AM

What a touching image those hanging shoes.You can't imagine why this all had to happen in this way. All those angry young man discontented with their lives it is a big problem everywhere.

It is hard to believe... we are all in such shock right now.

A nice post, CaT. So much has been said, there is very little new to say, but we have all been touched so much that we still want to try to say something.

Never been on Newbury Street before> You have lots more to see, then. It is the street for the art galleries. And after that, Commonwealth Avenue.

We don't really have a way to grasp and understand things like this.