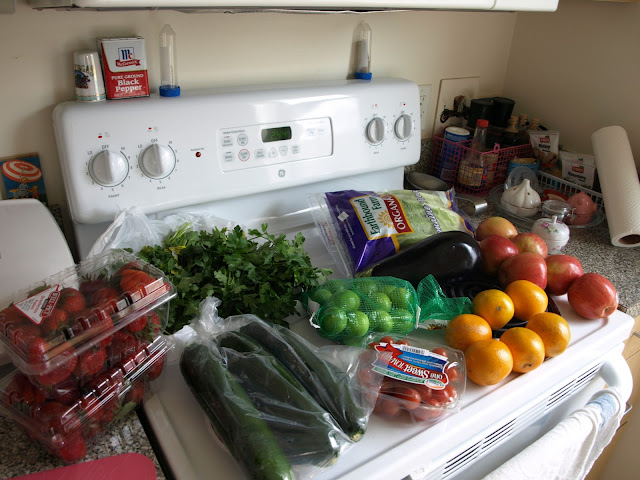 i was running out of fruit and vegetables. but i cant drive, and our favorite supermarket is a 10-minute drive away. so... i went to haymarket in boston! its a 15 minute ride or so with the subway, and the market is right outside the station (which is aptly named haymarket)
the t-shirt stand next to the subway station was already selling t-shirts saying; "boston marathon, 04/15/13, we will never forget", which i just found sad and a little creepy.
i spent 10 dollars and 50 cents, and above you can see what i got. the quality greatly varies at haymarket, sometimes the stuff they sell is literally rotting, but what i got today seemed all very good. except the strawberries; 2 boxes for 1 dollar! they are about to go bad, so im thinking to bake some sort of strawberrycake tomorrow..... they also had 3 pounds of tomatoes for 1 dollar, but i decided the small box with cherry tomatoes was enough for me...
(for the scientists; yes, those are 2 50ml falcon tubes on top of the stove....)
Tweet
Pin It
Labels: boston streets, food, shopping
Posted by CaT at 12:03 AM

When is Tim coming back?

Do you use the tubes for salt and pepper? Funny. I always want to have fruit at home too. I buy lots of them on the market. Funny to see your stove, so different from ours here. It is electric I suppose. It looks a bit like one I used in London once.

Markets can be hit and miss. We are looking forward to the summer farmer's markets where everything is local and therefore not already rotting by the time it is sold.

@biebkriebels; no, i actually keep oldfashioned razorblades in there, for cutting the bread before it gets baked! and yes, its electric, i miss cooking on gas!!!

@kay; yes, we do try to buy mostly stuff that does not come in a box with a barcode...

@hamilton; haymarket is sort of an outlet for fruit&vegetables. whatever isnt sold, they sell for very low prices. sometimes its (still) good. sometimes not at all... you usually cant expect to keep the stuff for too long...