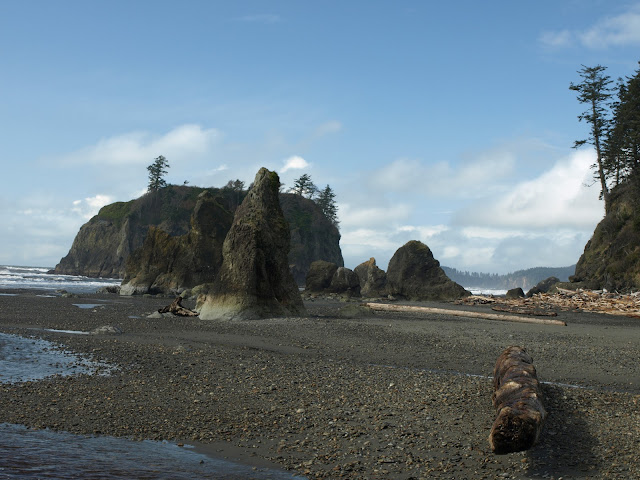 since i havent taken any pictures since we got back from our trip, and i took plenty during... here another one! this is still on the olympic loop in washington. that drive was just so magical. one momet the skies would be dark and cloudy, and the next the sun would shine and at some moments the sky would even turn blue! somewhere along the route we wanted to take a hike to a waterfall, but just as we got out and ready on the trail it started to snow/rain quite heavily and so we turned back to the car and had lunch instead, while overlooking the lake (glacier lake, i think). then there were the mossy trees everywhere, and not too many other people.... here we were suddenly treated to an amazing coast! when we got out of the car it was raining and the sky was so dark!! my lens kept getting wet, so many pictures have raindrops on them... :( but out of nowhere that sky turned blue, its really funny to see my first picture from the above scene where its all grey, until we were ready to get back to the car again, and it had gotten all blue!!
the above rocks were huge, very impressive to see.... i couldnt decide which photo to post. my other option was one with raindrops :(, but tim next to that rock in the middle... hes really tiny there... tim, i mean.. :)
Tweet
Pin It
Labels: road trip
Posted by CaT at 11:09 PM

haha.. yeah, this was a great and beautiful beach. i wish we were there again!

It is a great landscape again. I hadn't seen Tim at all until you mentioned. But now you see the scale much better.

I'll bet you were at Lake Crescent - very close to the highway that took you to the coast? Big, beautiful, ringed with mountains?

ah yes!! thats what it was called. very pretty. reminded me a bit of norway...