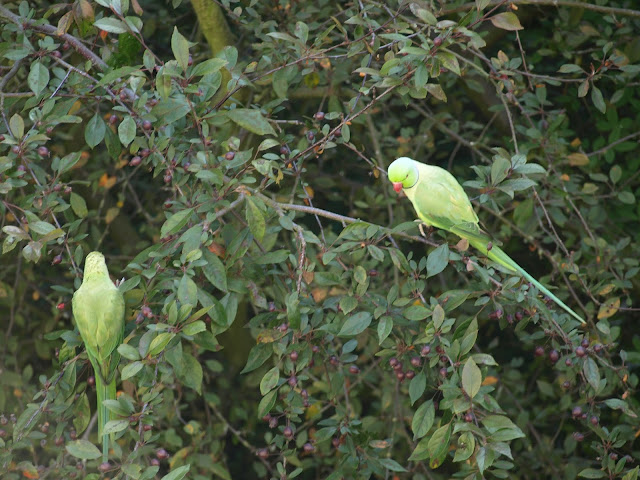 this photo was taken last week (or was it already the week before?), from the balcony. these birds are flying around all day, and lots of them! at first i was not aware of them, but tim once showed me and now i keep hearing and seeing them. quite the exotic bird for a not very exotic city like amsterdam! its an afro-asian parakeet species, to be specific the ring-necked parakeet, and they are actually very ubiquitous. they make quite some noise while flying around, and they themselves also like noisy surroundings. thats why they are mostly found in larger cities.
the birds live in amsterdam since 1976, especially in a park (het vondelpark), but they like to fly around amsterdam every now and then. how did they get here? most likely from where they originated; asia. but the population is mixed with parakeets that escaped their birdcages.. and in brussels, belgium, the population originates from the release of a couple of birds by a zoo owner, who wanted to make the city a little more colourful. i like watching them fly by. usually they fly in little groups of 2 - 3, and they are colourful indeed!
Tweet
Pin It
Labels: the netherlands
Posted by CaT at 6:17 PM

These seem like very un-Amsterdam birds. I was glad to read that they are not native.

These birds have now also evolved into a tasty street-snack. Parakeet-balls are little green fried dumplings and you can get them on most street corners in Amsterdam.

Yes that is weird isn't it. I saw them in the Vondelpark. Somebody must have let them go once and they like it very much here. Better then in a cage. Only the local birds are not happy with them, they are overruled.