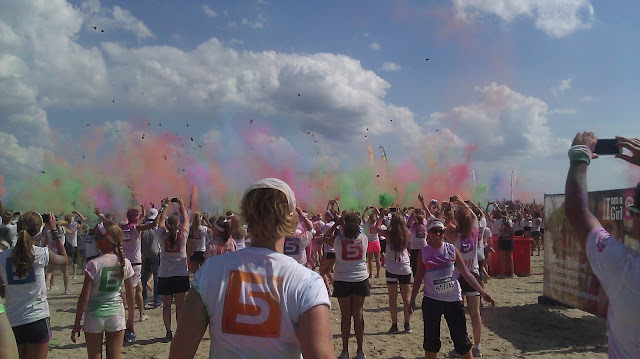 yesterday we participated in the color run! as you might know, the color run is more of a fun run than an athletic event where you run 5 km (3 miles) and every kilometer you get sprayed with another color, so that you look quite silly when done.... i had read about those while in the us, but we returned to the netherlands before there was one close to boston... then i discovered they were also in the netherlands, so i got a friend and tim crazy enough to join me. jaaaj!! it was supposed to be in utrecht, where i used to live before moving to boston.
when they finally releassed the course map, it turned out not to be in utrecht at all, but in a tiny town nearby. not very well accessible by public transport. grrrrrr... that already pissed me off, just like the "rules" they posted: bringing your own food or drinks was prohibited (water would only be allowed in case of hot weather). and their "advice" pissed me off even more: bring plenty of money, so that you can buy food and drinks at the party! (we had paid already 30 euros per person (some 40 dollars) for the ticket). so i did some googling and discovered that the color run does good by donating part of the entrance fee to charity (i must say i missed that point and solely joined for my own fun, but some were really thinking they were "doing good" by participating in this event; but.... 90% of the money goes to the organization, and only 10% goes to a good cause! moreover, most of the event is run by volunteers who got nothing more than a t-shirt (and of course the chance to douse everyone in color, that must have been a fun job). considering that 10.000 tickets were sold for this run... they made a LOT of money.... (in the US, over 600.000 people participated last year in various cities). (in fact, on their website they do mention they are a "for-profit" organization, but they are better at telling everyone they are "giving back and doing good")
well, anyways... while we started off pretty annoyed (we were stuck in a train with other color runners, and most of them turned out to be giggling girls... the 3 of us felt old and out of place!!), had to walk over 30 minutes just to get to the location NOT in the center of utrecht, had to aimlessly wait over an hour in the hot sun just to be able to start running (i actually didnt mind the sun, but apparently some more fragile creatures collapsed before they even started running)... the actual run was quite fun. well... run... i think around 75% of those giggling hip young girls were not running at all, but just walking (and some were smoking too, arrrghhhh, those dutch idiots)!! that really surprised me (although i didnt start running until 29 and would not have been able to run at their age either....). all those colors were pretty to see (but not fun to get into your mouth, at least it was just colored food grade corn starch), and as you see above, at the "party" everyone got to throw their own packet of color. too bad i didnt bring my camera... surely there wont be a next time, but i wouldnt mind watching from the sidelines to take pictures....
Tweet
Pin It
Labels: crazy weather, frustration, the netherlands
Posted by CaT at 7:13 PM

You learned a good lesson about "charities," didn't you? It is disappointingly common to discover that lots of the money that is raised goes into the pockets of the organizers, not the intended beneficiaries.

When I worked for nonprofits (3) we were always concerned about keeping "administrative" expenses low (under 20%) and "program" high as possible. It really affected our ability to get grants and ask for donations. Sometimes it felt like an excuse to keep salaries just above poverty, but I also lived in a very wealthy community and there was often an attitude that working women didn't need the money so much. I know I did and I know that we ran very lean!
(Thank you for the links to the recipes. Sounds like something to try come winter.)