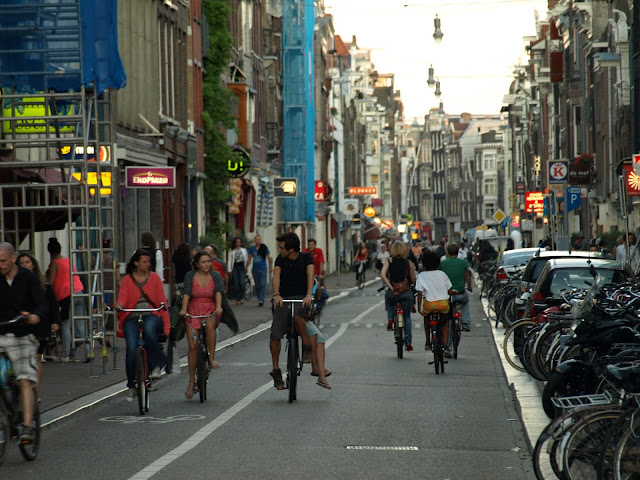 a typical dutch scene. bikes, bikes and bikes. ive been biking a bit, mostly with tim since i dont really now my way still on a bike in amsterdam. and... i get to experience again why i so often used to say "aaarrghhh, everyone around me needs to take lessons in biking!!! from ME!". while in boston i really missed biking, and was very annoyed by the aggression many motorists displayed just by seeing someone on a bike on THEIR road. and i remember even once writing that those that do bike in boston dont really know how to, and that dutch are so much better at it... HA! a perfect example of glorifying the dutch bikers when not surrounded by them, while in fact.... i am more often than not annoyed by fellow bikers! (and scooters too, but thats for another post). yesterday we biked through the city center during a busy time of day and then you get bike traffic jams. people are too slow, people bike next to each other so that you cannot pass them (and refuse to move aside when you are approaching), people are frantically using their "fietsbel" (bicycle bell) to let you know they are coming and YOU need to move aside asap (and then they turn out to ride so slow that you have to pass them again). others are on their fancy phones while biking and dont pay any attention (that really pisses me off, and is something new, 3 years ago it wasnt this bad), and yet others are so superfast that they think they have the right to just hop onto the footpath to pass everyone, perhaps even running over some pedestrians in the process. then at the next traffic light everyone is together again, even the fast ones (unless they ignore the light, which happens often too), and the whole process starts again.....  aaarrrghhhh. i had forgotten all that and how i get worked up about it. tim doesnt really have that problem... he probably has a lower chance of heart disease than i do.... :) oh, and then i didnt even mention the tourists. all those tourists that want to have the real experience and rent a bike, usually in large groups, blocking every possibility to pass them while they are figuring out how you actually move forward on a bike.... ;)
pfew. i feel a bit calmer now... the street above leads to the entrance port i showed you earlier, but you dont get to bike underneath it...
Tweet
Pin It
Labels: amsterdam streets, bike, frustration, photographing strangers, the netherlands, very dutch
Posted by CaT at 6:51 PM

It sounds like you're going to run into the same thing anywhere it's crowded: too much humanity annoys you, no matter what nationality.

I was amazed by the ability of the bikers in Amsterdam to multitask. I remember a young female lawyer or banker all dressed up for work, with a child on a child seat, while she carried her briefcase in a basket in the front and talked the whole way on her cell phone. No big deal.

Good way to stay in shape and trim.

People never learn, anything. You and I know best!