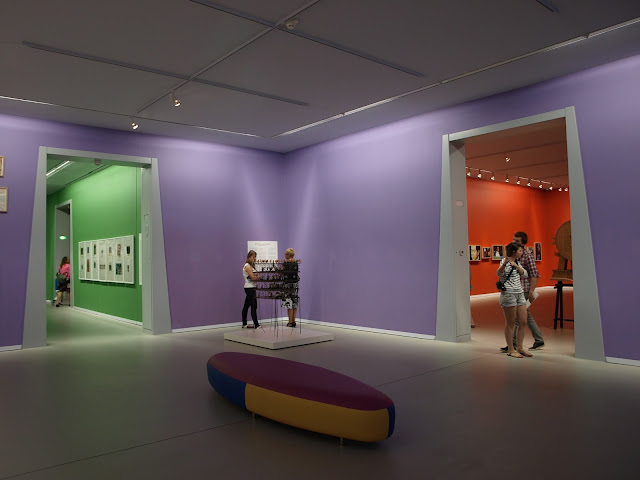 last week we were tourists in our own country; we went to the north of the netherlands, to the city of groningen. its almost 2.5 hours by train from amsterdam. i found some kind of cheap(er) deal with train tickets and 1 night at a hotel. as the dutch say, groningen is in "het hoge noorden" (high up in the north of the country), so a little girl in the train asked her mom why the train was still on flat terrain, and not going upwards to get to groningen.... "noo, thats just a way of saying! the netherlands is entirely flat...!" "but you said we were going to the extreme north!"
close to the train station is the museum of groningen, in a very modern looking building. i dont know if i really liked the outside, but i liked the colorful walls on the inside, as you can see here. this was an exhibit curated by ai weiwei and 2 others, named "fuck off".it shows art from different contemporary chinese artists, questioning and contemplating more or less everything in china today. at the entrance was a warning that some of the art could be perceived as "shocking". and some of it was shocking indeed. to give you just one example; one artist decided to get himself cut. i think the "art" was called "one meter of democracy". friends he had invited could vote whether he would have himself cut open or not, and the majority voted yes. so a cut was made over 1 meter of his body, quite deep. and pictures were shown from all steps of the process (the voting, the cutting, the actual cut, sewing it up again). it was not fun to watch and for me there was no message other than that the "artist" must have been crazy (as well as the "doctor" allowing this to happen). and like that there were many more pieces that i dont even want to describe to you!
currently, tim is working night shifts and thus has to sleep during the day. its weird as he leaves in the evening, and comes back when i just get out of bed again. it also made me realize i am much less quiet when going about the house than i thought... :)
Tweet
Pin It
Labels: museum, the netherlands
Posted by CaT at 7:17 PM

This facility is excellent, but that "artist" cutting himself? Sick.

Fantastic colors. Re. the art "installation"--I think that the so-called friends are even sicker! I would have walked away. Good subject for a psychological analysis.

The colors are wonderful. I'd be curious to see Ai Weiwei's work, but I couldn't handle self mutilation. And, like Kate, I'd wonder about the "friends."

I like the museum, but what a weird exhibition, hadn't heard about it. The child in the train was a clever one with the "high north" ha,ha.