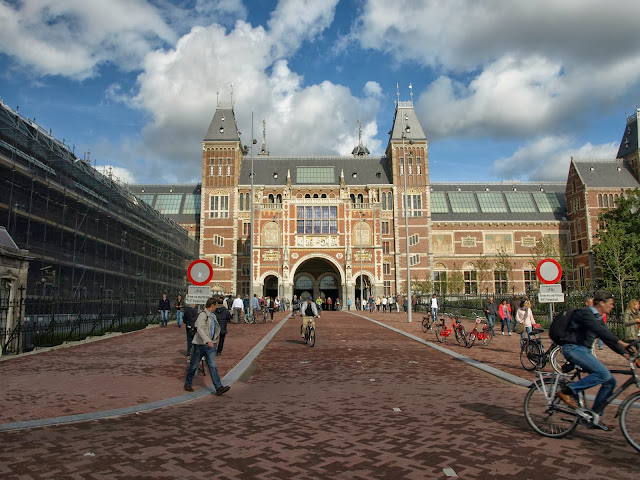 2 days ago i showed you the pond overlooking the museum square. turning around, you see the rijksmuseum. to the left there is still some construction going on so you cannot really see how huge the building is! it opened in 1885, and was built to mainly display the paintings of the 16th and 17th century dutch masters.
as i mentioned before, the building has been closed for 10 years for renovation (financial troubles and what not), and re-opened just a few months ago. there is a passageway underneath the museum that you can see here, which was originally built for a tram line, but that never happened. motorized vehicles were allowed until 1931. after that, only bikes were allowed. but... while the museum was closed, bikes werent allowed either. in this picture you can see how huge the museum is, and the red lines indicate the more dangerous routes bicyclists had to take while the passageway was closed. there are 2 main museum entrances under the passageway on either side of the street, and the new director of the museum wanted to keep the street closed for bikes; it would be too dangerous for especially tourists. eventually in court (!) it was decided that the underpass should re-open to bicyclists.
to me, biking in amsterdam is still a challenge! tim says im behaving like an old lady, but i never biked in amsterdam before. that, combined with not biking at all in the usa for the past 3 years makes me indeed a little hesitant at times. but.... there is just sooo much traffic! you have to watch out for cars, trams, buses, pedestrians, other bikes... then you also have to be careful not to get stuck in a tram track (im still extra carefull when crossing the tracks, and there are a LOT of them), the crazy fast scooters that are allowed on the bike path (luckily they are banned from the passageway above), and all the construction going on everywhere so that sometimes the street literally stops in front of you and you have to either bike through the sand, over shaky boards or have to take another route altogether. on top of all that, the city center is full with tourists on bikes (who clearly do not know how to bike), and people (accidentally) stepping on the bike lanes.... causing peak stress levels for someone who is used to biking in utrecht, a much smaller city, with less crazy traffic...
Tweet
Pin It
Labels: amsterdam streets, bike, museum
Posted by CaT at 3:54 AM

The traffic has increased a lot the last few years. Many people are complaining about it. I haven't biked here for 30 years now and I will not do anymore. I always walk, which can be dangerous too, ha,ha.

Still more construction being done there? They never stop!

The bike traffic sure seemed heavy to me, but I thought that was because I was not accustomed to it. The Dutch think it is heavy, too? That is a new insight.

I agree with your caution...but I guess I actually qualify as an old lady...