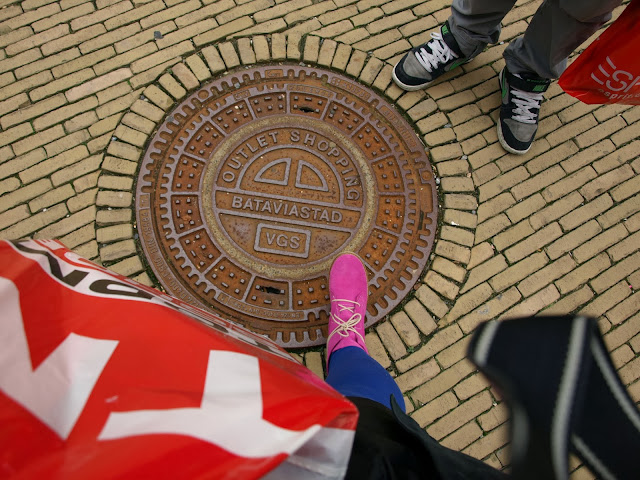 .... shoes! ah, and another manhole cover. as you can see, this one is in an outlet shopping center. as far as i know, we have only one outlet center in the netherlands (but i could be wrong). for sure this one was the first to ever open, in 2001. its in lelystad, and there is not much else around (except for a nice museum about the history of lelystad; this province was reclaimed from the water, as you might know).
just like an american outlet center, this one has a lot of parking. but.... even here in the middle of nowehere you still have to pay for parking (aaarghhhh!!), just like you have to pay for everything here in the netherlands (including visiting a public toilet). we werent really looking for something to buy, but the shoe shop had very cheap shoes (really cheap!). so i got those pink shoes above (and blue shoes... perhaps i show you those some other time). i really didnt need those... but well....
Tweet
Pin It
Labels: shoes, the netherlands
Posted by CaT at 5:01 PM

The Dutch take bride in the design of their manhole covers. Nice. Pink shoes? Uhhh, OK.

Yes, they changed the parking for free some time ago, so stupid. We haven't been there since anymore.

It doesn't make sense that you have to pay for the privilege of going somewhere to spend money. But that's my thinking. Most people have to pay to park in downtown city areas, but at a shopping center??

I have to laugh: more shoes?! Have you found space yet for all of them? But I can't laugh too hard. I find a number of things irresistible, too - especially if the price is really good.