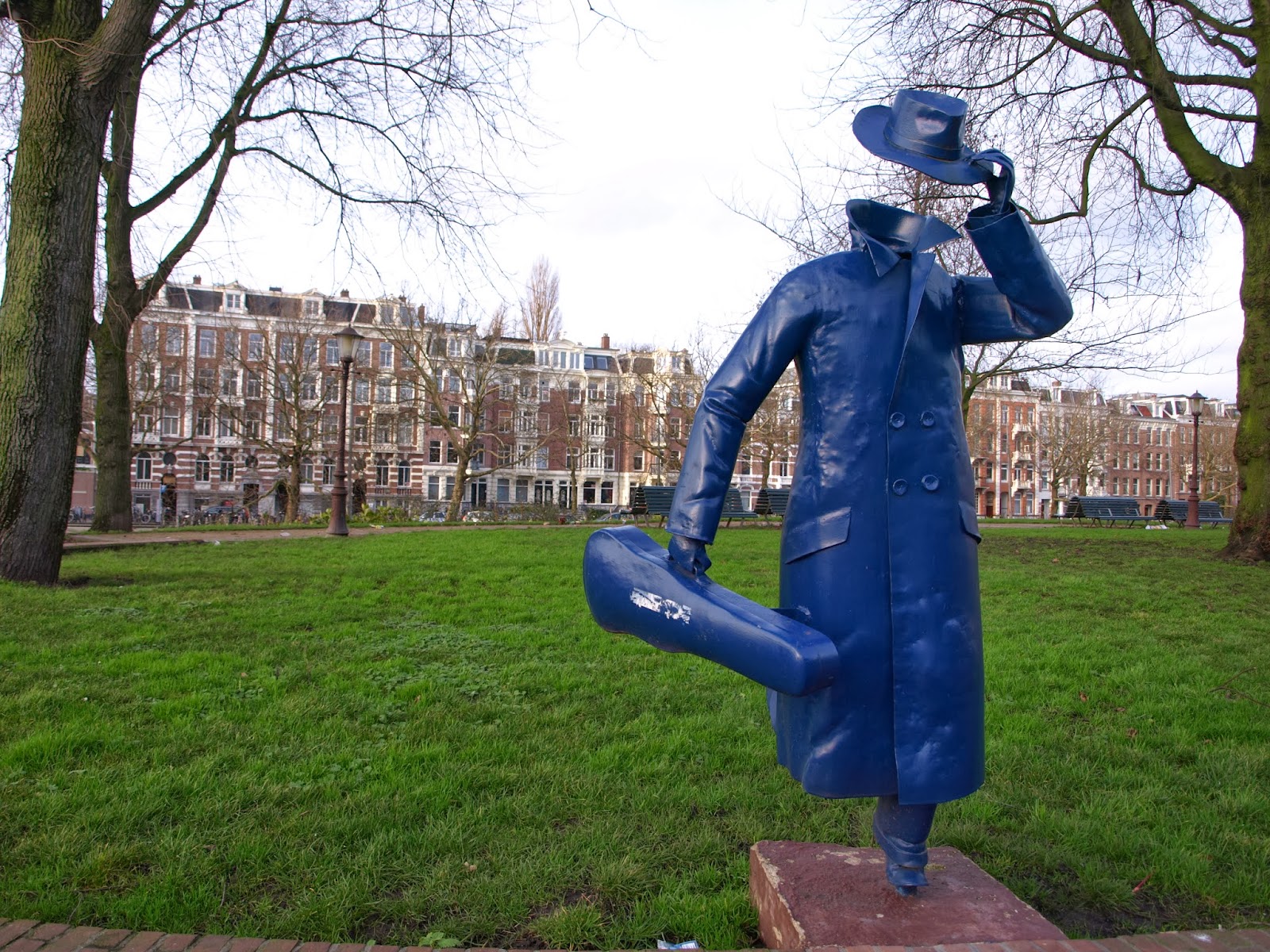 im very bad at street names, so i wouldnt be able to tell you where exactly i took this picture, but its in amsterdam.. :) i have to say, one of the reasons (among others) i am taking less pictures now, is because im usually riding a bike when i see something.... either its too busy to just stop, or im just too lazy, or we go too fast and i realize i saw something interesting when we passed it already. but here it was january 1st, there werent too many people on the street and we decided to finally stop. i had seen this sculpture before and i like it a lot! people call it "man with violin case", or "man who tries to catch line 10". google told me a lot about the sculpture. for example, it was black (or very dark blue) originally. then, in 1989  it was suddenly gone. the neighborhood had no clue what happened to it, and thought it was stolen. one day it came back; blue. in need of a touch up again, it was removed in 2011, and came back another shade of blue. people protested and it came back blue as above.
yet... the most interesting about this sculpture, is that the general public does not know the sculptor! in 1982 it just appeared, placed there during the night. between 1989 and 1995, 5 other sculptures were placed in various places in amsterdam. all during the night; the following morning they were just there. some speculated it was our former queen, but the municipality of amsterdam received these sculptures as a gift, provided that the artist remains anonymous..... allegedly, the sculptor is a medical doctor by day and an anonymous artist by night... :) how cool is that?! i should find the other sculptures as well... when i do, i will surely post them here.... (unless im on a bike and too lazy to stop....)
Tweet
Pin It
Labels: amsterdam, amsterdam streets, art
Posted by CaT at 6:13 PM

What a great story! I'd be very fond of this one.

Aha - this is obviously 'The Invisible Man' (dressed in blue, of course). And the sculptor must be Dr. Jekyll !

This will be the best photo you will ever get of the invisible man. :) I like how it is shrouded in mystery.

I have read about this sculpture but never seen it in reality. It is a nice mysterious story.

What a GREAT story and sculpture. Instructions for you: find more sculptures and get off that bike to photograph a few for our delight!!

If anyone is interested, I found this link about the sculptures: http://whatsupwithamsterdam.com/2012/10/23/the-mystery-of-the-sculptures/

Now, Cat, it's your job to find them and photograph them for us!!

You are defiantly too lazy! I am always on the bike when I see interesting stuff. Cool artwork it is. Glad you stopped.