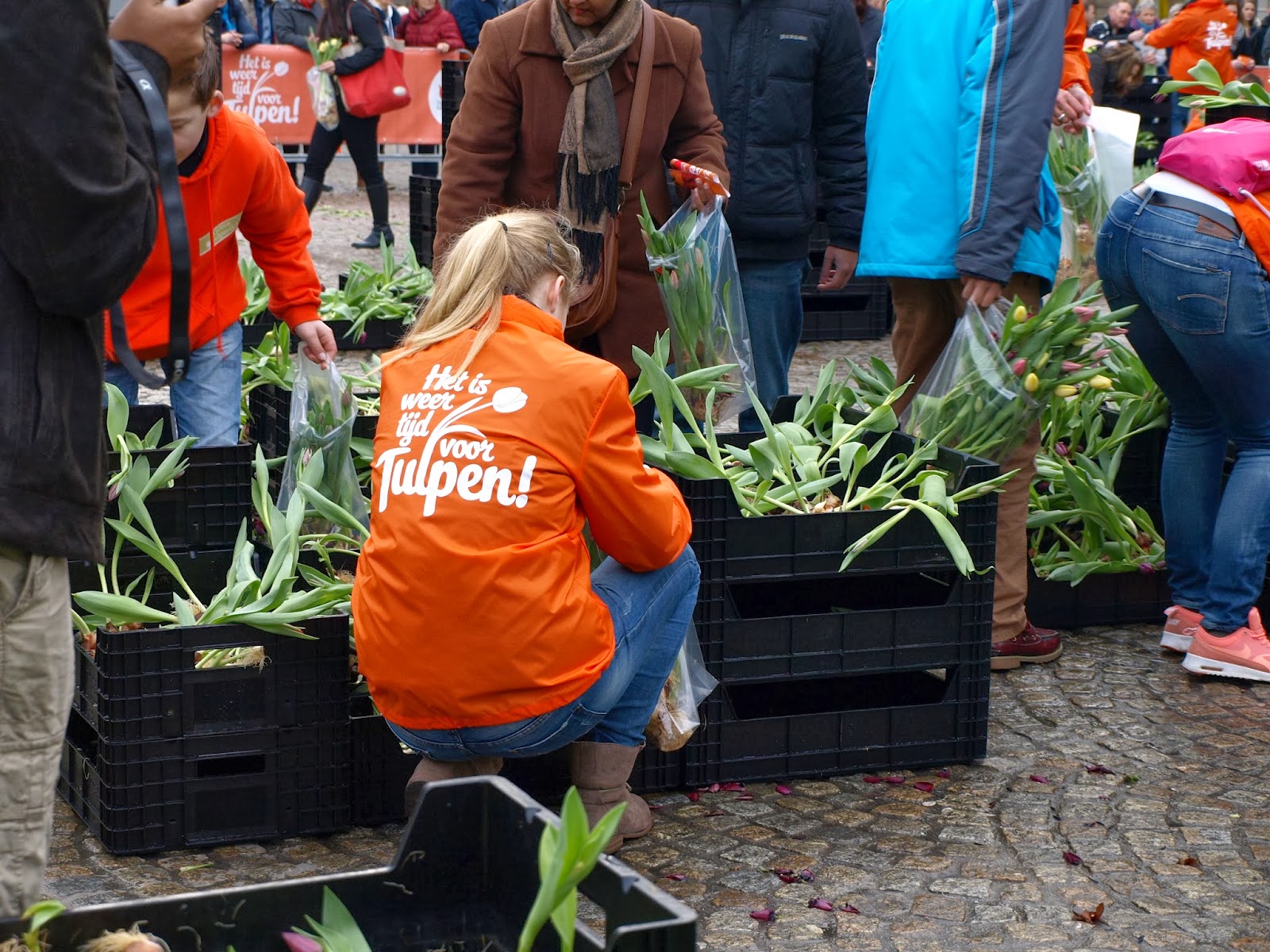 yesterday, there were free (!!) tulips available on the dam square in amsterdam. last year, while still in boston, i had seen the pictures on biebkriebels blog (here), so when i read this event was coming up again, i wanted to see it for myself! it marks the start of the tulip season; tulips are now available everywhere again, and it is a way for the florists to promote the tulip (and flowers in general). the girl with the orange jacket was with the organization of the event. her jacket says; "its time for tulips again!"
when we arrived, the event had been going on for 2 hours or so. i was a bit surprised and disappointed that the flower-pick-area was fenced off (but maybe without the fences it would be totally uncontrollable?), and i also didnt see the "artwork"; the tulips were placed in a pattern so that from above it looked like a particular painting. i think we were too late; many tulips had been plucked already! in total there were some 200,000 free to pick for anyone who was willing to stand in line a little. thats what we did; we both got a plastic bag and were free to pick as many tulips as we liked! we both filled our bags and that was more than enough (now at home we have 2 full vases, its so pretty!!), but some asked for a second bag or brought big bags themselves; i really wondered what those people were going to do with SO many flowers... they came with the bulbs still attached to them, so i am now in the process of drying the bulbs. then i have to wash them and get all the green and roots off and then they can be planted later this year (i had to look all that up, i had no clue!). so... i hope my mom wants some bulbs, as we dont have a garden. apparently, most tulips need to be taken out of the ground each year after flowering, dried, cleaned and kept till its time to plant them again...
Tweet
Pin It
Labels: amsterdam, amsterdam streets, flowers, free stuff, photographing strangers
Posted by CaT at 5:37 AM

What a GREAT event!! Smart girl to research and get ready for spring. Makes my heart sing to think of tulips in bloom!!

Yes we bumped by accident the first time we passed by and there were no fences at all. I guess nobody knew about it. Last year there were suddenly fences and bags and queues to enter. This year we didn't go. When it is free so many people come to these events. Indeed I was amazed too that people took so many tulips, even tourists! What will they do with them in a hotelroom? Ask for a vase at the reception? :)

Wow! This would be a real treat! The Skagit Valley Tulip Festival (north of Seattle) is all about selling: you pay to get into several of the farms, pay for bulbs, pay for bouquets.

This looks like an incredible event. I'm glad you told us about it. And, that you got plenty of free tulips to make your apartment more colorful.