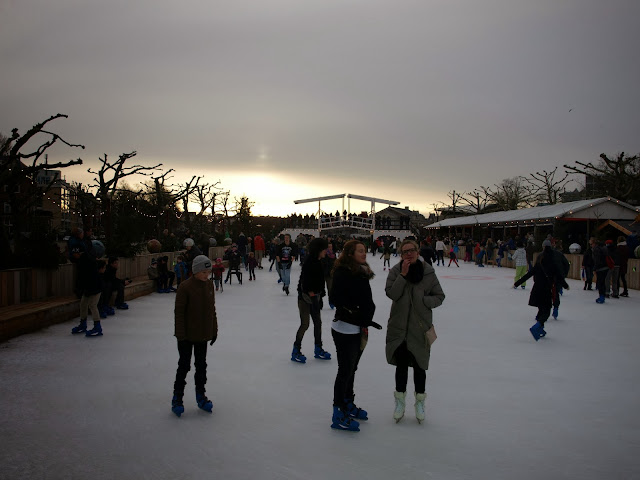 remember that picture i showed of the museum square back in september?! probably not :), so check it out here. now... the above picture i took from the same spot! thats quite a difference, no?! the pond is now a skating rink, and they built a typical dutch bridge for spectators to oversee it all. its by far not cold enough to have the pond frozen naturally, by the way... but it was still pretty chilly while we were there yesterday. it was very crowded! there was quite a line for getting into the skating rink.
biking was a little less fun. all the biking paths were scattered with broken glass. apparently celebrating the new year goes together with littering the streets and braking lots of bottles. it was a miracle my tires didnt get pierced! today on the news they reported that a lot of damage was done during new years eve (be it by fireworks or just vandalism in general), many cars got burned out and also a lot of people got hurt by fireworks. i think at least 10 people got blind on one eye, some lost their hand (or parts of it), and 1 person died. so... i really wouldnt mind if they would just forbid the use of fireworks, but im not sure this will happen anytime soon...
Tweet
Pin It
Labels: amsterdam
Posted by CaT at 6:10 PM

Ice skating outdoors is so much fun as long as the temperature does not dip too low.

Fireworks obviously took its toll on some of the revelers. Big price to pay for a short period of pleasure.

Nice pic! I liked this skating riink very much, it was really fun to watch all the children learning to skate and no speedy boys destroying the fun.

Ha! I just saw biebkriebels' post today. . .great minds!
She mentions your husband's post--which is his?!

Your other post of this spot was one of your best last year, though you had a lot of really great ones.

People certainly get stupid when they drink and "celebrate," don't they?