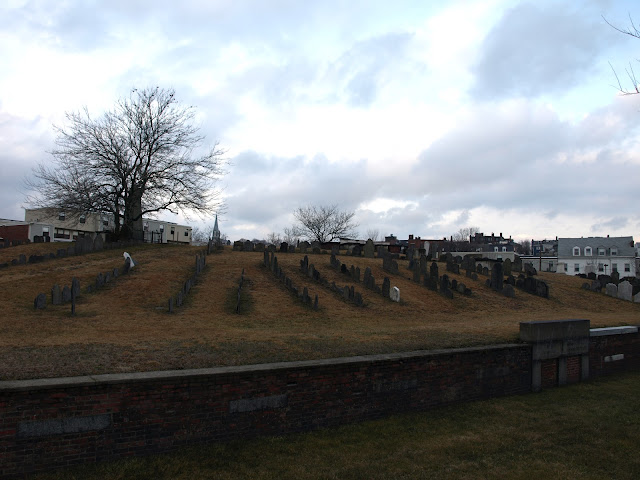 during the week, we will always goto work by subway, its fastest and cheapest (traffic into boston in the morning, and out of in the evening is more often than not awful). i wish i could go by bike as i used to in the netherlands. tim actually did it a few times, and i did not like that at all. fortunately, he himself decided pretty quickly to stick with the subway (you basically have to bike on the highway at certain parts.. beehh). but on weekends, we often go by car. parking is free then, and no traffic. when driving past charlestown, i always see the above cemetery. i had been wanting to go there since a while, and now that im participating with the taphophile tuesday, we finally did! driving by turned out not to be the same as actually getting there, but we eventually did. as it is fenced off, we walked around to get to the entrance, which was locked! buuuhhh... :( turns out it is always locked. i thus took the above picture through the fence.
this cemetery is in between blocks of houses, and looks a bit out of place. it has an elevated center, and then many graves seem to be placed arond that, in a circle, kind of like sun rays. it is named the phipps street burial ground, named after solomon phipps, a settler from england. it is the oldest cemetery in charlestown, dating from around 1630! it has 1549 gravestones, and according to the sign, it might be that the layout of the cemetery corresponds to a map of the town. fortunately, a 19th century "beautification" plan to straighten all stones into neat rows was dismissed. there are people buried here from every class and background, the most notable being john harvard. the exact site of his grave is unknow, however, since his marker stone is gone. (most of this info i found here.)
there was a sign on the gate "to enter this site, please call the boston parks department".it feels kind of weird, having to call someone to get access, (how does that work? do they come immediately, do you have to make an appointment..?) yet i would love to be able to walk around there, like this i could not get a good impression of the cemetery. so... another time, maybe... (just a pity i really, really hate to make phone calls..). on flickr i posted 2 more pics that i took through the fence.
for other taphophiles, go here!
Tweet
Pin It
Labels: boston sightseeing, cemetery, driving around boston
Posted by CaT at 11:31 PM

Intriguing that the cemetery should be locked in this way - requiring permission to enter! Most of ours on the peninsula are limited to daylight hours and then locked! There seems to be a small number of graves! Almost as if this may be part of a larger graveyard!

I love the neat rows.

It is nice situated between the houses but weird that the gate is closed. Security, check, check, double check? Don't think many people will make a phonecall to visit a grave.

The 'owning class of settler'!!! Golly what an expression.

The article shows the Phillip Street Burying Ground under a heavy layer of snow which changes its complexion totally.

As I noted, perhaps follow up Solomon Willard to see if he carved/created other notable monuments. In a similar vein to that taken by Nicole and her Samuel Gardner.

Thanks once again for your contribution. I love what you post. Very quirky to read.

i didnt know harvard was there!! i would have climbed the fence! haha

We have a few around here that are inaccessible, too. Mostly they are very small and have become surrounded by developments - or in the case of one in particular that has intrigued me, but is almost invisible behind a brick wall, a shopping mall. It was unlocked for Doors Open last year and I hope it is again this year as I didn't get there in time to wander through it.

I've seen some graveyards that have been vandalized; perhaps that is why this one is locked. But it's unfortunate. If you did get someone to unlock it, do they then stand around and wait until you've had your look? Not sure I'd like that.

Thanks for the link to the Amsterdam photos. It's funny to see people skating next to boats.

And thanks for your Valentine's Day story, too! I love to hear how people have met.

By the way, I recently read that incidents of bicyle riding deaths in the Netherlands is a tiny fraction compared to the U.S. It's much safer there than here. Bicyclists seem to be invisibe to U.S. drivers, unfortunately.

It looks rather bleak! Who would want to go there unless they were visiting a grave? I wonder if they have had problems with vandalism?

yes... i think there was a problem with vandalism, and its very old, so they want to preserve it.
i just read somewhere that you have to call 24 hours in advance, and then you can see the cemetery. but not on sundays, haha. i also wonder how that will be. will the person unlocking the gate be waiting there, until you are done? thats not very nice... so i guess i wont be visiting this place.
and yes.. theres supposed to be snow now, and not this poor looking grass!

ITs very uniformly laid out...never saw a locked cemetery...thats odd!! Glad you didnt let a lock deter you from visiting!