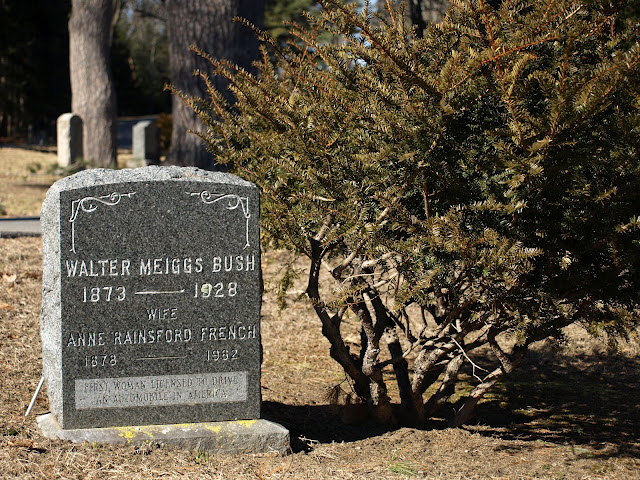 sorry! one day too late. but finally, one more grave from the sleepy hollow cemetery. right next to a bush, are walter and anne bush buried (did they plant the bush on purpose? i thought it very funny, i hope it was on purpose.. :) ). anne was the first woman in the united states to receive a driver's license! i had no clue someone had this honorable title, and i also did not know she was buried in concord, but it was on the cemetery-overview of notable people buried there. of course we had to check out her grave when we saw "mrs walter bush, first woman with a drivers license". when walking to her grave we were joking a little; ah, probably she got her license because they thought she was a man,which woman is called walter bush?! but then we realized that this is how married women are called "mrs. theirbusband'sfirstandlastname". beeghh! she was the first woman with a drivers license, can she please be addressed by her own name?! we also wondered what her grave would look like. would the stone be in the form of a car? would it somewhere say she was the first (auto)mobile lady? i didnt expect that, but indeed it did, perhaps its not very legible on this pic, but here you can clearly see it! (im just wondering who put it there? her family? upon her request.. or?).
anyways. anne french grew up in washington. her father, a physician, had a steam drive car that he maintained himself. he promised his daughter she got to drive it if she knew how to maintain it as well. and so she did. in 1900 she obtained her license, allowing her to operate a "four-wheeled vehicle powered by steam or gas." then she married walter bush and he took over the wheel. nope, no more driving for her. she later mentioned in an interview that he found that "driving is man’s business. women shouldn’t get soiled by machinery.” and even though she now and then reminded him she was the first woman with a license.. she remained in the passenger's seat. i myself still cannot drive. and tim is very annoyed about that. by now i cannot count the lectures anymore when he tells me how beneficial it would be, for the both of us, but especially for me, if i knew how to drive (i do prefer that over walter bush's view...)
one more cute thing i found: in 1952, the american automobile association (AAA) celebrated their 50th birthday. they tracked down anne and invited her to the celebrations. she had tea with the then-president's wife and did something she apparently always had wanted to do; she got to drive a fire engine!! all that just surprises me that she just let her husband do all the driving once she was married. perhaps she was afraid of what her mother once said to her, before marriage; “no gentleman would be interested in any lady who didn’t stay where she belonged and act like one", in reaction to her daughter driving a car....
theres so much more i wanted to write, regarding cars and women and what-not. but i leave it at this. maybe some other time! here some more photos from the sleepy hollow cemetery.
and go here for all the other taphophiles!
Tweet
Pin It
Labels: cemetery, driving around boston, weird sign
Posted by CaT at 11:07 PM

Mr. Walter Bush wasn't around anymore to forbid her to drive that fire engine so she took her chance.

So stupid she was not allowed to drive after marriage. I tried 3 times to get a license but never succeeded...It is nothing for me. But this poor woman was born in the wrong time.

Sorry, but is your "shift" key inoperable? This is very difficult to read--I think some capital letters and a little attention to your writing would do wonders for you blog if you intend for it to connect with others.

i dont really care about criticism from someone who doesnt want to make him or herself known.

Interesting!
Funny photo indeed CaT, with this bush so close to the grave.

hahaha yeah, use your shift key! let me demonstrate:

you can't drive, so you don't know how to shift.. of course, neither do americans, because they all use automatic transmission. D for democrat, R for republican.. anyway lets disregard some annoying lunatic i wouldn't even want such idiots reading my blog. but uhm.. oh yes!

GET YOUR DRIVERS LICENCE! :) but until then.. i will happily drive you to any cemetery.. or graveyard. whichever has a church.

Interesting bit of history! When we married, my wife kept her last name, so whenever someone calls for "Mrs. Anderson" we know they're trying to sell her something :-)

Driving stick shift on the wrong side was the 2nd hardest thing about driving in Africa. The hardest was remembering which side of a boulevard to go into when making turns.

@gene; hmm... which side of a boulevard?
considering wrong sides; i wonder how it is to drive on the wrong side of the road...

I think your style of writing connects very well with others.

I agree with your sentiments: if that person wants to yell at you, they should at least leave a return address.

Thank you to Tim for his comment in support.

It is so very daft. She followed his rules about not driving once she was married, but retained her maiden name.

Mmm ... I wonder if the label at the bottom of the marker, and the direction sign out the front of the cemetery, were installed by more recent people who are 'politically correct' in a very old-fashioned way.

She sounds like a very interesting woman, with some advanced opinons.

I wonder if she drove again once her husband had died. She had tons of time without him.

She was definitely a pathfinder. I loved this post, no capital letters and all! In fact, ifyouwanttowrite
andnotputanyspacesinit oR uSE bACKWARD cAPITALIZATION, that'sfineby me! We have an amendment for free speech, and for some reason I think that includes free writing!

and julie; yes, i did not even realize that indeed she is buried under her own name.. we did wonder whether we should contact the cemetery-people to tell them its kind of weird to have her listed as mrs walter bush while she in fact was ahead of her time... but well, i dont think they will listen to us!