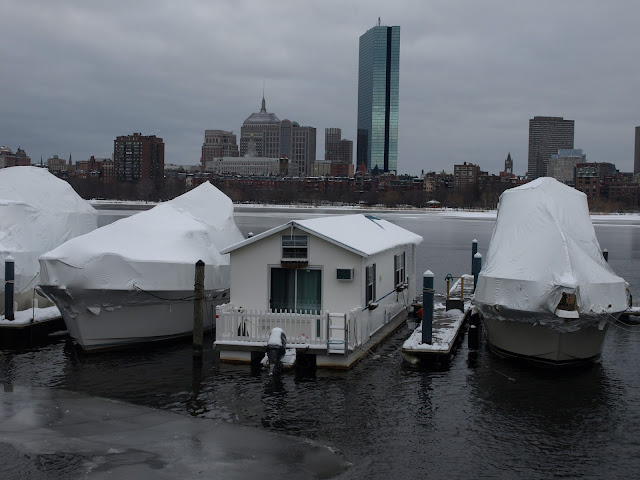 somehow i thought houseboats are only something that you will see in the netherlands... then i saw one in/on the charles river in boston! i was really surprised.... then i found out through wikipedia that houseboats are seen in many countries (they describe them country by country here). yet i doubt they are as omnipresent as they are in for example the canals in amsterdam. and the above one is really tiny. you can also move it, which is usually no really the case with houseboats in the netherlands. yes, they are floating, but thats about it... i also doubt that houseboats here are used the way they are in utrecht, close to where i used to live; there was an entire strip of houseboats, all with a red light behind the window.... for each houseboat more or less 4; a total of 143 windows or "workspaces" as they call them! i guess you know what i am talking about.... they also have a website, but its in dutch (here). and guess what, those are not in some backward part of town. right next to the "workboats" are normal boats for families. when i finally (but when?!) visit home again, i should take some pictures there... :)
for more interesting wikifacts about red windows and so on in the netherlands, go here!
Tweet
Pin It
Labels: boston sightseeing, charles river, the netherlands
Posted by CaT at 11:10 PM

When we lived in Maarssen and wanted to go to the Flower Market in downtown Utrecht we used to bicycle over the Zandpad. Always very interesting how the bike path suddenly changes from a lovely rural scenery along the Vecht river into a very urban setting.

@biebkriebels: at the weirdest moments it was extremely crowded there. like friday lunchtime; big expensive cars. or ofcourse on a friday/saturday very late at night. it always made me sad. that this exists. beeeeggh.

@manon; but indeed, during the day this is a very nice path (eventually) to bike! we once did it with the lab for our day out. one colleague openly wondered why there was a lady standing outside in her bra??!!!
then she realized.... that as very funny.

There are houseboats in the western U.S. and there are a number of areas in Seattle where people live on houseboats and, more commonly, just live aboard their regular boats. (The Tom Hanks character in "Sleepless in Seattle" lives on a houseboat, for example.) Houseboats for vacationing are rented on some larger recreational lakes. My husband has lived on boats but the idea of my whole home sinking makes me uncomfortable.

There are tons of houseboats on lakes in the Western United States, and many people live on sailboats in Florida and California, but I never thought about there being houseboats in Boston Harbor. I just associate living on the water with warm climates!

Re your comment of a few days back about what the angel statue in the cemetery is writing. I think she's writing the names of people in a book that says who will be admitted to heaven!